A continuing debate, in picking a structural system for a new barndominium, is what is going to be best? Due to years of conditioning, many assume a traditional wood framed, stick built barndominium, assembled on site is what will be right.  Granted, stick built houses, with traditional wood framing, are by far America’s most popular type of home. Over 82% of our country’s new homes are stick built.  But there are other types of construction available to achieve a quality built home. Some of those alternatives can give you a stronger, more energy efficient house and be quicker to build than a traditional stick built house.

Now keep in mind, I grew up with my father and his five brothers all being framing contractors – stick builders. Our dad’s profession kept lights on and food on our table. My first regular paying job as a teenager was working as a stick framer. 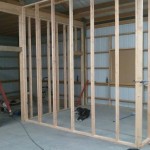 Traditional stick framing is what most of us envision when we think about building a new home. Dimensional lumber is readily available at lumber yards and ‘big boxes’ (think Home Depot®) in nearly every town and village across America. With traditional stick framing, this lumber is brought to a building site upon where a house structure is framed.  Stick framing, as a term, comes from framers assembling a house shell “stick by stick.” With stick framing, typically 2×4 or 2×6 pieces of lumber are placed 16 or 24 inches apart to construct a framework for walls, floors, ceilings and roof rafters.


Stick building began as balloon framing a method of wood construction – also known as “Chicago construction” – used primarily in areas rich in softwood forests. It uses long continuous framing members (studs) running from sill plate to top plate, with intermediate floor structures let into and nailed to them. Once popular when long lumber was plentiful, balloon framing has been largely replaced by platform framing.

In the 1830s, Hoosier Solon Robinson published articles about a revolutionary new framing system, called “balloon framing” by later builders. Robinson’s system called for standard 2×4 lumber, nailed together to form a sturdy, light skeleton. Builders were reluctant to adopt this new technology. However, within 50 years, some form of 2×4 framing was standard.

As Taylor was constructing his first such building, St. Mary’s Church, in 1833, skilled carpenters looked on at these comparatively thin framing members, all held together with nails. And they declared this method of construction to be no more substantial than a balloon. It would surely blow over with a stiff wind! Though a baseless criticism, this name stuck.

Although lumber was plentiful in 19th-century America, skilled labor was not. Cheap machine-made nails became available, along with water-powered sawmills making balloon framing highly attractive, because it did not require highly skilled carpenters, as did dovetail joints, mortises and tenons required by post and beam construction. Now any farmer could build his own buildings without a time-consuming learning curve.

It has been said balloon framing populated western United States and western provinces of Canada. Without it, western boomtowns certainly could not have blossomed overnight. It is also likely, by radically reducing construction costs, balloon framing improved shelter options of poorer North Americans. For example, many 19th-century New England working neighborhoods consist of balloon-constructed three-story apartment buildings referred to as triple deckers. Our son Brent lived in one of these triple deckers when he studied for his Master’s degree at Springfield College in Massachusetts.

Balloon framing did require very long studs and as tall trees became exhausted, platform framing became prevalent. The main difference between platform and balloon framing is at floor lines. Balloon wall studs extend from the first story sills continuous to the top plate or end rafter of the second or third story. A platform-framed wall is independent for each floor

Once framed, OSB or plywood sheathing is applied to exteriors.  Then plumbing, wiring, and duct work are placed in and around walls and floors. Next, insulation is added between framing members and/or to exterior walls.  After a building inspection, inside walls are typically covered with drywall and exteriors are covered with a choice of cladding—stucco, siding, stone or brick.

Tune in Tomorrow for our exciting conclusion.

An Overhead Door Rant
While I am on an Overhead Door Rant I have been...
Safety Concerns from the Heartland
DEAR POLE BARN GURU: Could you give me a cost of i...
When It's Built Wrong - Construction Mistakes
Now me, I look at the photo and think to myself, “...