For years I have preached about the efficiencies of post frame (pole building) construction, as compared to stick frame construction.

I appreciate the beauty of a well-designed pole building – every piece has a structural function, there are not the redundant materials found in typical buildings with stud walls. The idea of efficient structural design is to have every piece of material loaded as close to 100% as possible, under maximum design loads. This is best use of materials.

The photo in this article is of a stick framed wall. These stud walls are in a building being constructed by one of America’s biggest builders. 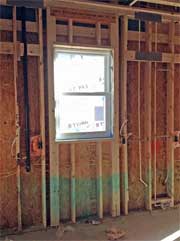 In case it isn’t overly obvious, the framing contractor used far too many studs. At the rough opening, there are two king studs, two trimmer studs supporting the header, and two jack studs supporting the sill plate. Additionally, there are two extra common studs on either side of the window, creating small cavities which are difficult to insulate. The only reason for the studs so close to the window is this is where the 16-inch on center layout fell. If the window were slid to the left or right about 4 inches, one of these extraneous studs could have been eliminated.

Keep in mind, today’s average contractor in the field who is swinging a hammer is not paid to think, they are paid to do. Giving thought to the economies of efficient material use, is not a priority for them. If it is there, they use it, until they run out – then they have the general contractor or building owner buy them more!

Almost half of the studs at this window are wasting money, time, and energy.

Extra framing costs money and takes up space which insulation could occupy; not only does this cost extra money up front, but with a climate controlled building it costs the building owner every single month!

Smarter building strategies, including using efficient pole building design, can save $1,000 or more in lumber on a 2,400-square-foot building and add 10% to the amount of wall that can be insulated. “Nail pounders” should like it because fewer pieces to handle and install makes the job go faster.  Don’t get caught in the wastefulness of overkill stud walls.

Green Pole Barns
Green building is one of the most dynamic market f...
Polo Arenas
Hansen Pole Buildings Designer Rick and I were hav...
Room in a Barndominium
Room In A Barndominium I read plenty of chatter...