Usually none of these get hung from the bottom chords of roof trusses, however lots of other things can be.

Standard pole building truss designs will support only the extra weight of minimal lighting and electrical. Don’t panic, virtually anything can be supported from your pole barn trusses and we can design for it – as long as you let us know what it is, in advance.

I know I’m going to get “the eye” from my wife if I tell this story, but sometimes I just can’t help myself!  One day ten years ago shortly before my wife and I got married, I happened to look up into the trusses in her garage.  I don’t know a better way to say this, but after my jaw hit the floor, I wasn’t sure if I should stand there and risk having 20 years of “stuff” come crashing down on me, or just do the smart thing and….RUN for my life!

Up above in her trusses was camping gear, and I’m talking serious camping gear: tents, chairs, camp stove, and….a huge tent.  This was just the beginning.  Ski gear with tow ropes, at least 3 sets of skis, a dozen life vests, wake boards and boat ladder occupied another corner of the “loft” area.  Close to the front door was the “garden section”: pots and planters of all sizes, rolls of black liner for garden beds, weed eaters (one gas, one electric) and for some odd reason, snow shovels. 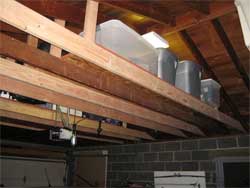 Do you have junk in your ...truss?

Next was the “seasonal decorations” area – Christmas, Easter, Halloween and enough tubs of Christmas lights to outfit 5 or 6 homes!  Lastly and probably the most confusing, was an assortment of “miscellaneous” boxes.  I’m talking 18 to 20 boxes, some of which I could barely haul down they were so heavy. To my dumbfounded query, “what IS all this stuff?” she quipped, “You know – those things you really don’t need any more but can’t bear to part with”!

Being the compassionate, sensitive, guy I am (read this as scared!) to really voice my major objections to this unfathomable “load” in her trusses, I gently broached the subject: “Um darlin’, so – you had the trusses of your garage designed to carry all this extra load….right?”  I cringed and dove for cover as she indignantly answered, “Load?  All the stuff FITS up there, doesn’t it?  And after 20 years it’s not fallen down yet, so what’s the problem?”  Since I sensed a bit of exasperation in her voice, I carefully explained the importance of supporting “whatever you are putting up there”.

And I am now happy to report, after ten years of marriage and letting her sons take turns living in her former home, she finally consented to bringing down all the “stuff” in her garage.  (OK, so I nagged a bit about it – I’m a Building Guru, what do you expect?) But now if the roof on her old garage falls down, “you know who” is going to be saying, “Told you so”!

So back to designing your roof trusses for increased loads.  The most popular – is 5/8” sheetrock, attached to ceiling joists hung between the trusses. Ever considering having a dry walled ceiling? If so, just order your new pole building with ceiling loaded trusses.

Just killed or planning on killing an elk? An average adult male elk weighs about 1000#. Tell us in advance and we can have the trusses designed to be able to support the extra weight.

How about pulling engines? That 700 to 800 pound V-8 engine can be accounted for – again, we just need to know about it, as well as where on the trusses you plan to pick up the load.

Moveable crane? While tracks are best and easiest attached to the inside of the sidewall columns, the tracks can also be mounted to the bottom of the trusses.

Whether it is light or heavy, your favorite toy or your spouse’s hundred plus boxes of “stuff I just can’t part with”, if you want to hang it from your trusses, just let us know!

Typical Wall Bracing Details for Pole Barns
There are many ways to permanently brace walls of ...
How Tall? Monitor Style Barns, and Planning a Buil...
Today's PBG discusses "how tall a pole barn" can b...
Two Story Pole Buildings
Are Two Stories the Solution? Another great que...