Home >> Uncategorized >> Shouse >> Should My Barndominium Have a Vapor Barrier? 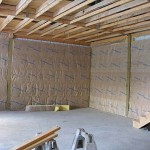