I really suppose it is unfair of me to limit this article to just airplane hangars, as I have had instances to design hangars for helicopters as well.

As an elementary school student, my pre-teen friends and I were all very impressed when a girl down our street’s father landed his helicopter in a field behind their house. We made certain to keep this area free from weeds, so he could land more often!

When I was a post frame building contractor, we were approached by a gentleman who lived in a very exclusive neighborhood a few miles north of our office in Millwood, Washington. His idea was to land his helicopter in his driveway and roll it away into its own post frame hangar to be attached to his home. Somehow his neighbors were not overly enamored of this idea and sadly mounted successful efforts to see his idea did not come to fruition.

A project actually coming together as it should have was a barndominium/hangar just outside of Las Vegas. When most think of how difficult it could be to acquire a Building Permit in Clark County, Nevada, they turn tail and run. Either I was not smart enough, or was too stubborn, to realize it could be a challenge and happily dove right in.

Our client wanted to combine living and flying. Moreover, he wanted to live above his hangar. This would be no simple accomplishment, as he required a 42 foot clearspan width to allow for his hangar door as well as to provide enough wall each side of this door to prevent racking due to wind shear. Our client’s original idea was an attic truss, one giving a bonus room at center. This proved to be too limiting as he would end up with only a long and narrow room at the middle of his second floor.
Instead, we designed for a solution using 42 inch deep parallel chord floor trusses and placed a second floor on top of this system. Post frame to his rescue! 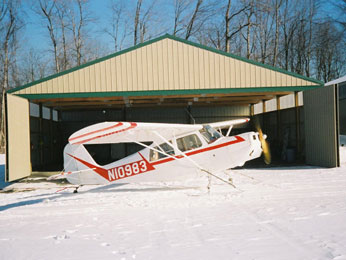 Interested in more light reading on hangars? Go to www.HansenPoleBuildings.com – navigate to SEARCH at upper right and click on it. Type HANGAR in this search box and ENTER. Magically you will be treated to numerous relevant articles on hangars for your reading enjoyment. You can do this with any term, try BARNDOMINIUM for instance.