In today’s world savvy shoppers can go on the internet and fairly quickly track down the best buy on virtually any commodity item. Sometimes even pole barn comparisons.

According to the sum of all knowledge, Wikipedia:

“The term commodity is specifically used for an economic good or service when the demand for it has no qualitative differentiation across a market. In other words, a commodity good or service has full or partial but substantial fungibility; that is, the market treats its instances as equivalent or nearly so with no regard to who produced them. As the saying goes, “From the taste of wheat, it is not possible to tell who produced it, a Russian serf, a French peasant or an English capitalist.” Petroleum and copper are other examples of such commodity, their supply and demand being a part of one universal market. Items such as stereo systems, on the other hand, have many aspects of product differentiation, such as the brand, the user interface and the perceived quality. The demand for one type of stereo may be much larger than demand for another.”

If the same savvy shopper is on the ‘net searching for a new post frame (pole) building, and just looking at dimensions and basic features (doors as an example), it might be perceived pole barns are a commodity – and as such, be driven to the lowest price without concerns for things such as durability and functionality.

My position has always been one of, If you do something different than your competitor, you’ve shown to your customer you’re willing to help them. Maybe it’s at an extra cost, but it helps differentiate yourself from others. Too many times guys say, “Joe down the street (or across the span of the internet) isn’t going to do it so I’m not either”. By going the extra mile every business I have ever been in got more work and built happier relationships.

Prospective clients, just like you perhaps, always tune in to their favorite radio station – WII-FM (aka What’s In It For Me), so they are looking for the benefit, not the feature. It doesn’t matter if a building has gold plated steel, if the gold plating doesn’t afford a direct benefit to the end client.
And PRICE is a feature, not a benefit.

How about the ability to entirely customize a new post frame building with dimensions to best fit the available space and needs of the client? Without paying a premium price? Any width, any length, and height, any roof slope! 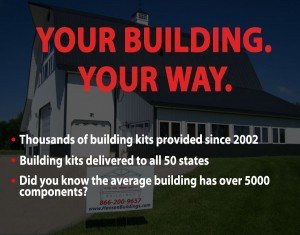 Think post frame (pole) buildings are a commodity? If so, it would behoove you to look much closer.

Here are a few pieces of wisdom to consider:

“The Bitterness of Poor Quality remains Long after the Sweetness of Low Price is Forgotten”.

“The most expensive suit is the one you only wear once.”

The common law of business balance prohibits paying a little and getting a lot … it cannot be done. If you deal with the lowest bidder, it is well to add something for the risk you run. And if you do that, you will have enough to pay for something better.” ~ John Ruskin

In order to do a fair comparison, and know if you are comparing “like items”, ask the pole barn companies you get quotes from to do a post frame building quote comparison to the other quotes you have. A company worth their salt will not only tell you what they do better, but will honestly tell you what the opposing company’s benefits are over theirs.