A Problem Good Structural Engineering Could Solve Part I

This is copied, by permission, from a blog post by Aaron Halberg, P.E. Aaron is a member of the NFBA (National Frame Building Association) Technical and Research committee.

(In one of the many discussions following the rash of building collapses experienced throughout the Midwest this winter, I received a copy of the email below from Dr. David Bohnhoff, PhD, P.E., Emeritus Professor at the University of Wisconsin – Madison. I reprint it here with the other names removed and with Dr. Bohnhoff’s permission in hopes that his message will reach a wider audience)

“I’m responding to your email and copying a few others on it as I feel the need to get some talking points out in the general public.

For starters the State of WI Uniform Dwelling Code (SPS Chapters 320-325) has absolutely nothing to do with agricultural buildings.  It is a PRESCRIPTIVE code that is only applicable to small buildings.  This would be buildings, for example, whose clearspans seldom exceed 20 or 30 feet.

Larger buildings are structurally engineered in accordance with the governing commercial building code.  In the State of WI, this is a slightly modified version of the International Building Code (IBC) and is referred to as the WI Commercial Building Code (SPS Chapters 361-366).  From a structural design perspective, the IBC is a PERFORMANCE code and it contains verbiage specific to agricultural buildings.  For what could be argued as antiquated (historic) reasoning (more on this later), the State of WI exempts (via SPS 361.02(3)(e))) farm buildings from all provisions of the WI Commercial Building Code.

For reasons (sometimes sheer ignorance) there are a number of builders who believe you can build large buildings in accordance with a PRESCRIPTIVE code for small buildings. 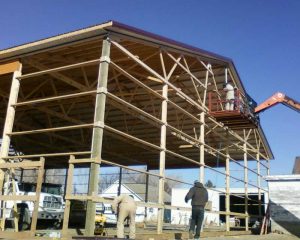 When buildings get large, structural engineering gets more complex.  Most loads are far from being nice and uniform.  Wind and snow patterns are highly variant and quite complex.  When you add in parapets, cupolas, ridge vents, asymmetric roofs, steep roofs, intersecting roofs and associated valleys, overshot ridges, and sudden changes in roof height, AND you combine these with snow that can be blown in any direction, THEN (simply put) you have pages and pages of calculations you better perform if you want both an efficient and safe building.  Calculation of loads and load combinations is the first step in the structural design of a building, and not only are these loads dependent on the size and shape of the building you are designing, but they are also dependent on adjacent structures and terrain.  In many areas of the county, seismic loads are a big part of the equation, and obviously add significantly to the work involved in structural design.

Once the engineer has his loads, he/she begins the process of sizing components AND CONNECTIONS to resist these loads.  To design an efficient structure (in order to keep cost down), the engineer is constantly figuring out (1) ways in which secondary structural components and cladding can best be used to reduce the size of primarily structural components, and (2) ways that components can be connected to reduce component and connection stresses.  This takes both knowledge and experience.  A couple hallmarks of buildings that lack structural engineering are primary framing components that have little or no resistance to buckling, and mechanical connections that have little or no strength because fasteners have been inappropriately sized, spaced and/or located (with respect wood connections, fasteners often induce high wood stresses because they are too close together, too close to the end of a component, too close to the edge of a member, or otherwise used in a manner that induces high tension stress perpendicular-to-grain).

Come back tomorrow as Dr. Bohnhoff continues his discussion of reasons post frame buildings fail due to higher than “normal” snow loads in Part II of a three part series.