In structural design of post frame (pole) buildings, an ability to transfer wind shear loads from roof to endwalls to ground becomes a key to cost effective design success. When sidewall columns are in a properly constrained condition (usually by attachment to a concrete slab-on-grade) shear forces are reduced by 25%. This reduction can result in smaller dimension sidewall columns, as well as a reduction or elimination of need for OSB (Oriented Strand Board) or plywood reinforced roof or endwall planes.

These savings are most often apparent in buildings with a far greater length than width, are fairly tall (especially if narrow) and/or are in high wind regions. In some cases savings from constraining sidewall columns can overcome a significant amount of costs to pour a slab-on-grade!

Savings – I now have your attention. Now I will explain constrained. 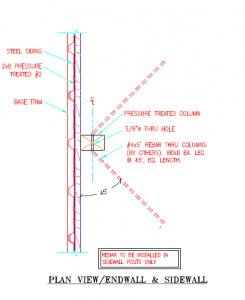 In simple terms, attach sidewall columns to a concrete slab-on-grade to prevent ground surface movement. Rebar hairpins can be an effective method to achieve a constrained condition, and can be read more about here: https://www.hansenpolebuildings.com/2016/10/rebar-hairpins/.

2 thoughts on “Importance of Constrained Posts”