From small towns to large metropolitan areas, most have restrictions upon heights of buildings. Most restrictive of all are typically those placed upon residential accessory buildings (think garages and shops).

In urban planning there are a lot of cases where cities are for and against height restrictions. Mostly because some communities are expected to look a certain way and to keep a consistent image conserving its essence. For example, nobody would be allowed to build a high rise in the middle of Florence, Italy. Some urban planners encourage disappearance of these ordinances and codes and push for a free market approach where anybody would be able to build as much as there’s demand.

Then you have neighbors. Neighbors will always be against new tall developments because they fear their neighborhood will transform for bad. However most of them ignore their real estate value increases when tall buildings are built in their neighborhoods.

“My township has an ordinance of a 1,000 square foot barn/garage, which is fine because I want a 30×30. But they have a maximum height ordinance of 15 feet. How can that be achieved? I would want to put a vehicle lift in the barn also.” 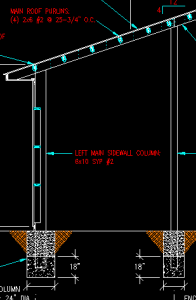 Overall height restrictions can be far tougher to work around than ones limiting only wall height. In Steven’s case, he wants to have a vehicle lift inside his building, usually requiring a clear height of 12 feet.

Let’s work from most common (and usually most economical) roof slope of 4/12. In a 30 foot wide building, difference between height of an outside eave wall and center of roof would be 60 inches, or five feet.

By placing columns 10 feet from each sidewall and using dimensional lumber or LVL (https://www.hansenpolebuildings.com/2013/01/lvl/) rafters instead of roof trusses, it would allow adequate height for a vehicle lift in interior area between two columns. This would afford a nine foot width overhead door centered in an endwall as well.