What is an LVL? 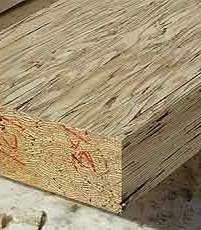 Laminated Veneer Lumber (LVL) is an industry standard in framing of new wood frame buildings. LVLs are used to replace solid wood beams and joists. They are made in a process similar to plywood, where rotary peeled wood veneers (usually pine or fir) are dried then laminated together with glue and adhesive resins under heat and high pressure. Why use LVL’s? According to APA (The Engineered Wood Association – formerly the American Plywood Association) LVL is part of a broader family of products called SCL (Structural Composite Lumber). LVL is the most widely used SCL in the family. Laminated beams offer enhanced dimensional stability, along with fewer imperfections and stronger engineering properties than standard lumber. Standard widths (thicknesses) are 1 ¾ inches and 3 ½ inches. Lengths are available up to 60 feet. Standard depths are 9 ¼. 9 ½, 11 ¼. 11 7/8. 14. 16 and 18 inches. How strong is an LVL?  Laminated Veneer Lumber creates structural elements which virtually never fail if used correctly. Its load capacities are precisely calculated for each use. LVL grains all run in the same direction which makes it very stiff and stable. Due to its high tensile strength it has the ability to support a great deal of weight along its length without sagging. This strength also gives the ability to span long distances without the need for posts. LVLs have high design values not only for bending, but also stiffness and shear strength. Where are LVL’s most used?  In framing buildings, LVL is most often used for beams and joists. Its strength makes it good for door and window headers, stair stringers and other beams. Designed for structural applications, the surface finish is of low architectural quality. In heavier construction, they are used for support conditions requiring a high-strength lightweight member. Many companies offer engineered wood  products, each with its own specific engineering properties. Does an LVL shrink or warp?  As a low moisture content, factory produced product, LVLs resist shrinkage, warping, splitting and checking. Many manufacturers use sealants on their LVLs to protect from moisture damage. No special fasteners are required for assembly, LVLs installs just as easily as ordinary lumber. LVLs have no defects to cut out, reducing jobsite waste from downfall. How about saving trees?  Green concerned? As LVLs use veneer rather than whole sawn timber, many trees are saved. LVL production uses wood resources efficiently as the veneers come from trees with wood otherwise considered low in quality.