I live in a 103 year old home most frequently referred to as, “Our Home of Perpetual Remodel”. Between this and my inherent Norwegian frugality, I’m usually the last one to recommend knocking something to the ground and starting from scratch again.

When I started working on “the house” back in 1990, the first order of the day was the garage. The 1930’s era structure was designed as a two car garage (the two cars being Model A’s). At 16 feet wide and 20 feet deep, there is no way I was going to be able to park two of anything other than motorcycles in it. It had simply outlived its practical lifespan. 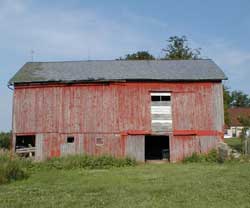 Now this existing garage had some interesting architectural features – in its 20 feet of depth, it had a dozen feet of grade change, so the structure was supported by eight cedar logs used as posts – yes, it was a pole building!

Carried out as part of a major and well planned renovation scheme – remodeling, refurbishing or adding onto an existing building can most certainly have benefits for the occupants.

However, retrofitting existing pole buildings really only makes sense if:

• The underlying structure is sound.

• The impact on what we might call the ‘usability’ of the building is positive.

So is retrofitting the right option at all?

If the ongoing maintenance of a pole barn remodel requires higher levels of investment than a newly constructed pole barn then the answer is obvious: demolish and start again.

The cost of bringing older pole buildings up to modern standards and then maintaining them to the standard often exceeds their value.

It could be argued the truly green solution is to retain existing stock. This may be true by just comparing the one off economic and carbon impact of refurbishment with the one off cost of new build.  Looking at the total cost of a refurbishment project over its lifetime (including maintenance and eventual replacement) in both cash and carbon terms, the outcome can be very different.

Cost and benefit modeling should be used to compare the benefits of demolition and building new with the costs of maintenance of the retrofitted building over its useful life – and the cost of further refurbishment after 30 years or complete replacement.

Of course there are a range of intangible factors around the social consequences of clearance and demolition and the loss of normally less than aesthetically pleasing older pole buildings. But decisions need to be based on clear sighted logical processes. It may seem harsh, but in terms of some buildings… we do need to start again.

Metal Building Insulation in Pole Buildings Part I
It was a cold morning….and I was working on one of...
An Avoidable Building Failure
I had already begun working on this article when I...
Lateral Wind Loads: The Shoebox
Here is an easy home activity, which will give you...