Earlier this year the propane tank on our barbeque grill decided to run empty. The solution – load up the tank and haul it to the propane transfer station at nearby Sisseton for a refill.

Propane is a hydrocarbon (C3H8) and is sometimes referred to as liquefied petroleum gas, LP-gas, or LPG. Propane is produced from both natural gas processing and crude oil refining, in roughly equal amounts from each source. Nearly 97 percent of propane consumed in the United States is produced in North America. It is nontoxic, colorless, and virtually odorless. As with natural gas, an identifying odor is added so the gas can be readily detected. 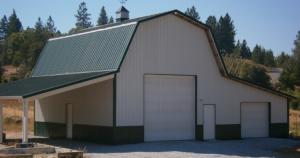 Now I was fairly amazed when the propane dealer refilled my tank – inside an enclosed building! I took a few steps back and made sure my Chevrolet Avalanche would block the path of any shrapnel when the shed exploded.

Luckily for the man doing the filling and my vehicle, the propane filling building did not go off!
Whether you are operating a commercial propane transfer station or merely the backyard meat burning warrior, safety coverings can be quite affordable.

Whether carport or shed, the investment per square foot covered will be roughly similar.
For commercial propane transfer stations, covering one or both post frame building ends allows for significant airflow while holding costs down. Roof only post frame buildings can become costly, especially as the gain height, as they have no walls to aid in transferring wind shear loads from the roof to the ground.