This is my humble opinion only – speaking for our industry, it is my belief we have a duty to our clients to design, produce, deliver and build (for those who are contractors) the most cost efficient buildings which are structurally sound.

If this sounds like common sense, then let me remind you common sense becomes rarer and rarer by the day.

Today’s photo is of a post frame (pole) building which was constructed between where we live on the shores of Lake Traverse in South Dakota and the Sisseton exit off from Interstate 29 this most recent January. It is NOT a Hansen Pole Building. 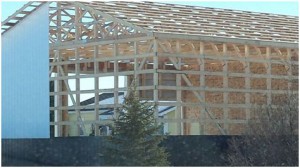 If it appears there are a lot of poles in this building, you are absolutely correct. There are a mountain of them – placed every four feet for some reason.

Why would one not want to have posts every four feet? To begin with, the worst part (and most challenging) of any building project, is getting out of the ground. What is below the surface is rather like the iceberg which sent the Titanic to the ocean floor April 15, 1912 – very little of it could be seen above the surface. With buildings, there are poor soils conditions, hidden springs and maybe the worst enemy – rocks – all of which could sink the budget of a new building project.

The fewer holes which need to be dug, the less possibility of one of those holes hitting a rock the size of a Volkswagon®. Trust me when I say, I have hit those very rocks in my own career.

Besides increasing excavation costs, every column takes roughly the same amount of labor to set, more posts equals more labor. All of those columns are going to need concrete placed below and/or around them – more expense.

I can see only one possible advantage in this design, with trusses placed every four feet, they can all directly bear upon columns, instead of having to place truss carriers (also known as headers) between each of the columns to support trusses. Well, with the double truss system preferred by Hansen Pole Buildings and our engineers, all of the trusses bear directly upon the columns anyhow and with columns spaced generally every 12 feet, there are 2/3 fewer holes to be dug!

Once I was able to get past all of the columns, my next objection (and waste of money) is all the knee braces. Read why here: https://www.hansenpolebuildings.com/2012/01/post-frame-construction-knee-braces/.

I’ll discuss one more issue from this building in my next article. Watch for it.