One of the most surprising things about steel is that it has an expansion coefficient nearly equal to that of modern concrete. If this were not so, it would cause problems because of additional longitudinal and perpendicular stresses as the temperature changed following setting. 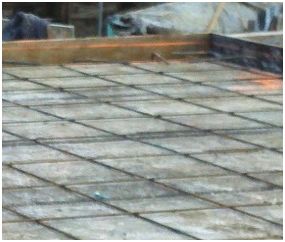 Although rebar has ribs which bind it mechanically to the concrete, it can still be pulled out of the concrete under high stress, an occurrence which often accompanies a large-scale collapse of the structure. To prevent such failures, rebar is either deeply embedded into adjacent structural members (40-60 times the diameter), or bent and hooked at the ends to lock it around the concrete and other rebar. This first approach increases the friction locking the bar into place, while the second makes use of concrete’s high compressive strength.

Common rebar is made of unfinished tempered steel, making it susceptible to rust. Normally, the concrete cover is able to provide a pH value higher than 12, avoiding a corrosive reaction. Too little concrete cover can compromise this protection through carbonation from the surface, and salt penetration. Too much concrete cover can cause wider cracks which also compromise local protection. As rust occupies a greater amount of the steel on which it has formed, it causes severe internal pressure on the surrounding concrete, leading to cracking, spalling, and ultimately, structural failure.

This phenomenon is known as oxide jacking. This is a particular problem where the concrete is exposed to salt water, as in bridges where salt is applied to roadways in winter, or in marine applications. Uncoated, corrosion-resistant low carbon/chromium (microcomposite), epoxy-coated, galvanized or stainless steel rebar may be employed in these situations at greater initial expense, but significantly lower expense over the service life of the project. Extra care is taken during the transport, fabrication, handling, installation, and concrete placement process when working with epoxy-coated rebar, because damage will reduce the long-term corrosion resistance of these bars. Even damaged bars have shown better performance than uncoated reinforcing bars, though issues from debonding of the epoxy coating from the bars and corrosion under the epoxy film have been reported. These bars are used in over 70,000 bridge decks in the USA.

Reinforcing steel can also be displaced by impacts such as earthquakes, resulting in structural failure. The prime example of this is the collapse of the Cypress Street Viaduct in Oakland, California as a result of the 1989 Loma Prieta earthquake, causing 42 fatalities. (Read about my own experience with this earthquake here: https://www.hansenpolebuildings.com/2015/10/a-whole-lotta-shakin-going-on/)

The shaking of the earthquake caused rebar to burst from the concrete and buckle. Updated building designs, including more circumferential rebar, can address this type of failure.

Fiber-reinforced polymer rebar is also used in high-corrosion environments. It is available in many forms, such as spirals for reinforcing columns, common rods, and meshes. Most commercially available rebar is made from unidirectional glass fiber reinforced thermoset resins.

Bare Splash Planks
Oh What to do About Bare Splash Planks Most peo...
The Case of the Frost Heave and a Pole Barn Porch
Allow me to preface this post about a frost heaved...
Attic Venting, Moisture Reduction, and a Vapor Bar...
This week the Pole Barn Guru answers reader questi...