Hansen Pole Buildings has seen a dramatic increase in the number of post frame buildings which utilize either a partial or full second or third floor, or bonus space within attic trusses.

Seemingly the average pole builder, or pole building supplier, has a limit knowledge of what is involved in the proper structural loading of these spaces. 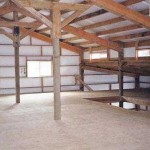 There are many types of structural loads to be accounted for during the design process. And some – like live loads – present specific challenges which require a deeper understanding to conceptualize.

Live loads include any temporary or transient forces which act on a building or structural element. Typically, they include people, furniture, vehicles, and almost everything else which can be moved throughout a building.

Live loads can be prescribed to any structural element (floors, columns, beams, even roofs) and will ultimately be factored into a calculation of gravity loads.

Uniform live loads are measured as pounds per square foot (psf). The acceptable live load will vary considerably based on the occupancy and expected use of a structure or structural element. For example, the live load for a room in a single family residence will be significantly smaller than the live load for an area of equal size at a movie theatre or sporting event.

To account for the inconsistencies among live loads, the American Society of Civil Engineers (ASCE), Standard 7 prescribes minimum live load requirements for buildings categorized by occupancy or use. In order to secure approval for construction, one must prove they have accounted for these loads in the building’s design and structural plans.

To understand this, consider a typical pole building second floor. Often lightly furnished, the majority of the live load imposed upon the structural elements will be attributable to people. In order to reach the upper limit of 40psf live load ASCE prescribes, a space of say 24 foot by 30 foot would have to hold 148 average-sized adult males (per Wikipedia, 194.7 pounds) at once. A more common (and realistic) live load would fall somewhere between 5psf and 10psf, a mere fraction of the prescribed minimum. There are other factors of safety built into the loads and the capacity of structures which provide additional reserve, in case loads are exceeded.

10 psf – uninhabitable attics without storage in a residence. Uninhabitable attics without storage are those where the maximum clear height between the joists and rafters is less than 42 inches, or where there are not two or more adjacent trusses with web configurations capable of accommodating an assumed rectangle 42 inches in height by 24 inches in width, or greater, within the plane of the trusses. This live load need not be assumed to act concurrently with any other live load requirements.

20 psf – uninhabitable attics with storage in a residence. Uninhabitable attics with storage are those where the maximum clear height between the joists and rafters is 42 inches or greater, or where there are two or more adjacent trusses with web configurations capable of accommodating an assumed rectangle 42 inches in height by 24 inches in width, or greater, within the plane of the trusses.

The live load need only be applied to those portions of the joists or truss bottom chords where both of the following conditions are met:

The attic area is accessible from an opening not less than 20 inches in width by 30 inches in length that is located where the clear height in the attic is a minimum of 30 inches; and

The slopes of the joists or truss bottom chords are no greater than two units vertical in 12 units horizontal.

The remaining portions of the joists or truss bottom chords shall be designed for a uniformly distributed concurrent live load of not less than 10 psf.

Attic spaces served by stairways other than the pull-down type shall be designed to support the minimum live load specified for habitable attics and sleeping rooms.

30 psf – Habitable attics and sleeping areas in a residence. This would also include bonus rooms in attic or gambrel prefabricated roof trusses.

Balconies and decks are to be loaded the same as the occupancy served. Where snow loads occur in excess of the design conditions, the structure shall be designed to support the loads due to the increased loads caused by drift buildup or a greater snow design determined by the building official.