In my career, I’ve designed a plethora of wood floors for post fame buildings. I’ve never yet has a client question me about one of the things which may later seem very important – how much will my floor deflect? 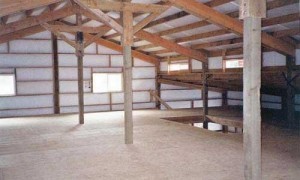 Post frame building buyers naturally take for granted wood floor system in a new pole building will be safe and comply with the building code—and rightly so. But buyers also have expectations for their floors which are unrelated to safety or the building code. In particular, many clients are aware of their floor’s “vibration” in response to foot traffic, which some people find annoying or disturbing.

In Canada, the building code includes limits on floor vibration. But U.S. codes don’t regulate floor vibration. So most U.S. builders design for deflection only—typically by holding deflection due to live load to a maximum of L/360 (where “L” is the floor joist span), or perhaps a more restrictive L/480.

Unfortunately, however, code compliance does not automatically equal customer satisfaction. Some components of a floor system which greatly influence the floor’s response to foot traffic—such as the presence of a ceiling, floor sheathing, supporting beams or girders, and partition walls—are not captured in the live-load deflection analysis required to satisfy the code.

To make things even more complicated, floor vibration is highly subjective: A floor which feels fine for one person may seem annoying to another. For example, the buyer who previously occupied a slab-on-grade building may have a different performance expectation from the buyer who has been living in the upper levels of an apartment complex. Additionally, problems not related to floor vibration, such as squeaks or sound transmission between rooms, often create the perception of poor vibration performance.

Subtle changes in floor usage or joist spans may also result in floor performance complaints. One common problem area is a kitchen with an island, where a homeowner may notice rattling dishes or ripples in a glass of water. A change in joist span at a bay window may also be a trouble spot, even if the difference in spans would seem to be slight. A short stiff member will make the longer spans feel softer.

Increasing joist depth (say 2×10 to 2×12) or increasing sheathing thickness improves the floor response. Increasing both at once leads to a very high rate of customer satisfaction. But, reducing vibration requires joists be much stiffer than required by code.

Laboratory research at Virginia Tech has shown client perception of floor vibration is related to the frequency of the vibration. Using test floor systems built in the lab, researchers found people were particularly sensitive to vibrations of about 8 or 10 Hz (cycles per second). At higher frequencies, vibrations were perceived as less annoying. Field investigation in real homes confirmed occupants were not bothered once the vibration frequency went above 14 Hz.

Looking for a wood floor which will give exemplary performance with a minimum of “bounce”? The solution is to specify an upgrade to a lesser deflection than the Code required L/360. Ask your Building Designer about the investment difference to increase stiffness to L/480 or even L/720. You might be surprised at how little the difference in price is!