Home >> Lumber >> Visually Graded Lumber Variability Can be a Problem

Visually Graded Lumber Variability Can be a Problem

While it is impossible to get around the fact lumber is an organic substance, and therefore has inherent variability, it has always been used as the primary raw material of the residential construction industry. In fact, the growing reliance on the structural design properties of lumber by the US housing industry led to the development of lumber grading processes and grade stamps in the 1920s. The process today assigns global strength properties to an individual stick of lumber by a visual inspection of qualities like knots and grain. 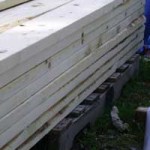 This process works well as long as the global strength properties assigned to a particular species, size and grade of lumber exist for each particular stick of lumber. However this is not always the case. The Southern Pine Inspection Bureau (SPIB), the entity responsible for establishing the global strength properties of Southern Pine (SP), determined the published design values which existed in 2010 were dramatically overstated. In turn, they published both Supplement Numbers 9 and 13 to the Standard Grading Rules for Southern Pine Lumber, recommending design value reductions of 25-30 percent for almost all sizes and grades of SP.

While they did not publish this fact, the SPIB realized it had created a problem for SP lumber producers. If a structure failed due to an individual stick of lumber not having the strength properties published by SPIB, the lumber producer could be held responsible. SPIB added the following language to Appendix A of theStandard Grading Rules for Southern Pine Lumber in an effort to disclaim or avoid any warranty with respect to published design values:

Wood is a natural product subject to variations […]. Each piece or lot of visually graded lumber is not mechanically tested to verify strength properties. Since the stress ratings are representative of the entire producing region, lots from a specific location may have physical properties at the extremes of the property range or statistical distribution representing that range of strength values.

This change was immediately adopted by the American Lumber Standards Committee (ALSC), the body created by the U.S. Department of Commerce to oversee the lumber writing agencies such as SPIB. The new SPIB language essentially states visually graded lumber design values are not reliable for any particular stick of lumber.

This language creates a problem as there is a growing reliance on the structural properties of visually graded lumber, and lumber producers rarely provide any type of express warranty with respect to the strength properties defined by the grade stamp on their lumber. The concern which arises is whether this renders engineered product manufacturers (think truss fabricators) responsible for the performance of the engineered products they manufacture, even when the lumber design values on which the engineering depends don’t accurately represent the actual strength of the lumber used. As the lumber industry refuses to accept responsibility for design properties in visually graded lumber, responsibility appears to shift to any vendor or entity which assumes the accuracy of the design values, including manufacturers, their suppliers and their customers.

This tactic of the lumber industry was further solidified last April when ALSC adopted the latest version of its American Softwood Lumber Standard, also known as PS 20-15. PS 20-15 now defines design values as “published design data that are representative of the strength and stiffness of specific grades and species/species groups of lumber.” In practice, this definition means engineers who use lumber design values in NDS equations are working with approximate numbers. The design vales which should be ensuring structural components provide resistance to code-defined loading conditions are now merely representative of the strength and stiffness of actual materials.

There is a viable solution – machine rated lumber (https://www.hansenpolebuildings.com/2012/12/machine-graded-lumber/). The technology has existed for 50 years for every piece of lumber to be non-destructively tested for actual strength properties, however the lumber industry has failed to embrace it.