Buildings Under Construction are Vulnerable

With winds topping out at an estimated 100 mph, the severe weather blew across Scotland County, Missouri quickly on a recent afternoon. While the bulk of the county escaped with only minor damage, the National Weather Service reported a tornado touched down between Memphis and Arbela at approximately 4:40 p.m. on November 11th. 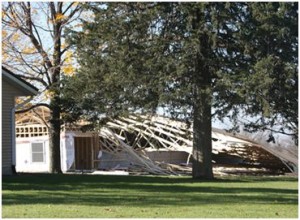 The EF-1 twister had an estimated max path width of just 75 yards, and was on the ground for roughly three minutes, wreaking havoc on a 2.5 mile path which started just north of Highway 136 at what is known as “Blind Man’s Corner” and traveled northeast.

“We were actually working on it and had just quit as the rain started,” said Fox. “We had got down and were putting up the tools when it got bad I’m just glad no one got hurt.”

Fox reported the loss of an old barn and a shed as well, as the storm traveled northeast, destroying the two outbuildings while relocating a number of large hay bales.

My long time readers have read my saga of partially constructed buildings and wind here: https://www.hansenpolebuildings.com/2014/03/wide-span-trusses-2/

I use the shoebox description to explain how buildings work: https://www.hansenpolebuildings.com/2011/12/lateral-wind-loads/

Once the process of sheathing a building has begun, it should be completed as expeditiously as possible. Leaving a partially enclosed building exposed to possible freak wind occurrences is a risk for damage or failure which increases with each passing day.

Vapor Barriers for Slabs on Grades
Our gracious thank you to Lisa Richards for this g...
Smashing Fiberglass Insulation Instead of Pumpkins
For those of you long-time readers, I have finally...
Why DIY Clients Do Great Work
Over 50% of all Hansen Pole Buildings kit packages...