There are sometimes I get reminded I really do not know very much. This question from a client reinforced this reminder: “I have an engineering question. The wind speed is 159mph but what do you use for density? At almost 8000ft. altitude the air density is very low compared to sea level. I don’t know the exact figure but could probably find it. Do you see the problem, the force of 159 mph wind is significantly less at 8000ft. than at sea level, so is that in your calculations??” 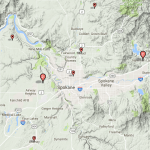 To calculate the density of air as a function of altitude, one requires additional parameters. They are listed below, along with their values according to the International Standard Atmosphere, using for calculation the universal gas constant instead of the air specific constant:

Temperature at altitude h meters above sea level is approximated by the following formula (only valid inside the troposphere):

The pressure at altitude h is given by:

Density can then be calculated according to a molar form of the ideal gas law:

Did you get all of this? Well in case you didn’t, this is only Part I as all it does is adjust the actual air pressure, not the pressure applied by the wind itself on a structure.

Not to worry however – as I cannot imagine a Plans Examiner who is going to allow for a reduction in pressure exerted upon a structure due to wind to be reduced due to low air density. Besides altitude, air density is also impacted by air temperature, with cooler air being more dense. If a Plans Examiner was going to accept a reduction due to density, they would also be looking for a corresponding increase due to the coldest expected temperature at the site.

In answer to the client’s query – no, it is not in our (or anyone’s) calculations and it isn’t going to start being included.