Moisture accounts for about 80% of construction defect litigation, so while lawyers may love the stuff, no one else benefits. In the worst cases, moisture trapped in the framing assembly can lead to decay which weakens the structure and to mold growth which renders a building unusable. 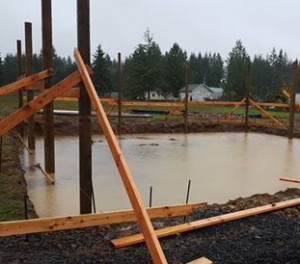 Problems need not be catastrophic to cause major headaches. For instance, plywood or OSB (oriented strand board) subflooring or roof sheathing which gets waterlogged during construction and gets covered on both sides before it dries may swell at the edges. Consequences can range from ridges which telegraph through shingles, to flooring which squeaks or separates from the subfloor.

Here is what needs to be understood to create durable, moisture-resistant pole buildings.

Address water first. The three biggest threats to wood-based building materials are water, heat, and ultraviolet radiation. Of these three, water is the biggest threat by an order of magnitude, so take care of this before worrying about the others.

Liquid Before vapor. Controlling bulk water—rain and groundwater—takes priority over controlling air-transported and diffused vapor. If you take care of rain and groundwater you can pretty much ignore air and vapor as long as you don’t have a vapor barrier in the wrong place.

Modern materials are moisture-intolerant. Older buildings were built with heavy, old growth framing members which could soak up lots of water. These buildings had drafty walls which helped water evaporate to the outside before it could raise havoc. One reason moisture problems are on the rise is today’s building materials can’t store and release the same amount of water traditional materials could, so they’re easily overwhelmed. I-joists don’t store anywhere near the water lumber does. It’s a difference of thousands of pounds of water in an average building.

Keep it out. The other reason is new buildings put those poorly absorbing materials in tightly built wall systems which dry slowly, if ever. A leak is much more likely to lead to rot or mold than in older buildings. Bulletproof cladding and flashing details are obviously critical, but design features like wide soffit overhangs can significantly lower a wall’s water exposure.

Most walls can tolerate some airflow. Many builders have read air leakage into walls will automatically lead to condensation, but this is not necessarily so. Most building science books are written from a Canadian cold climate perspective. But in most of the U.S., air leakage usually leads to drying rather than wetting because it’s not as cold outside in the winter and moisture levels inside and outside are not high enough to cause problems.”

Dry in the right direction. Building assemblies need to dry primarily to the outside in heating climates and primarily to the inside in cooling climates. In other words, watch out for wrong-side vapor barriers. If you have vinyl wallpaper on the inside of an air conditioned building you’re pretty much screwed.

Equalize temperature and humidity. A building component will last longer if it sees similar or equal temperature and humidity on each of its faces. That’s one reason siding will last longer if installed over a rainscreen. Example – drive through a subdivision of the 1970’s and 80’s where T1-11 wood siding has been used. The siding looks far worse on garages where the interior was not climate controlled.

Continuous means continuous. Drainage planes, air barriers, and thermal barriers need to be continuous. To determine whether they are, trace the line of a barrier on an elevation drawing: if you have to lift your finger or the pencil, it’s not continuous. Discontinuous barriers are a problem on most buildings.

Rainscreens also aid drying. The drying potential of a cladding will decrease with the level of insulation in the wall and increase with the rate of airflow. Airflow dries, this is why it’s critical to use a ventilated cladding on an R40 or R50 wall.

Sweat the WRB, but don’t obsess. The permeance of the water resistant barrier (WRB), or housewrap, probably isn’t as critical as you think. It needs to be more than five, but you’re not going to get much benefit using a WRB with a permeability of more than 20. The limiting throttle in most walls is the OSB and gypsum, which range from a low of 1 to a maximum of 10 perms.

Don’t cover wet framing. How big a problem is water absorption of building materials during construction? It’s huge now because we have a much tighter building with higher levels of thermal resistance constructed out of more moisture resistant materials. Just one more reason to construct and close in the roof of a new pole building, then frame the walls out of the weather.

One solution is to dry the framing after the building is weathertight but before the finishes go on. The most common ways of doing this are with kerosene-fired torpedo heaters and by using any forced-air heating system to dry the subfloors before installing the finish floor.

The bottom line is for a building assembly to avoid problems it needs the ability to dry out faster than it gets wet.