“A truss collapse can be devastating, not only to the immediate health of those on the job site, but to the installers’ confidence going forward. Training a crew in proper bracing techniques in a way that gets them past the negative experience requires more than a little thinking outside the box. 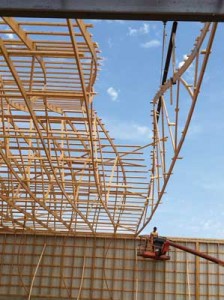 It is said a picture is worth 1,000 words. The following image of long span trusses communicate volumes about the importance of diagonal bracing in the context of lateral restraint (i.e., top chord purlins). The 80 foot trusses for this 80 feet x 130 feet x 18 feet agricultural storage building were manufactured by BBL Buildings & Components, Ltd. (BBL) in Perryville, Missouri, and installed by a local contractor. As the photo shows, the contractor didn’t follow the Building Component Safety Information (BCSI) installation documents for long span trusses provided by BBL with the delivery.

Soon after installation, the trusses started deflecting and BBL was called to the job site to inspect them. “We went out to investigate and found the trusses weren’t braced properly and were bowing out of plumb by three to four feet. The entire roof system was at the point of collapsing,” said Dale Schemel, General Manager at BBL. “The owner asked what could be done to straighten the trusses, but our recommendation was to take them down immediately.”

Fortunately, no one was hurt in this particular case. After the trusses were taken down, a thorough inspection of the chords, webs and plates on each truss was performed and it was determined they could be used as 2-ply trusses attached with screw fasteners. BBL redesigned the components to alternate every 2-ply truss followed by a new single-ply truss spaced 4 feet-0 inches o.c.”

How the builder in Kirk’s story managed to get as far as he did without taking some serious corrective action is frankly baffling to me. Long span trusses take special consideration when it comes to safe installation and proper performance. I’ve written about this in a previous article: https://www.hansenpolebuildings.com/2013/12/wide-span-trusses/