In the Middle Ages in Europe, water quality was poor on a good day (drinking water coming from streams which were also used as places to wash clothes and…sewers). With water being pretty much undrinkable, monasteries began brewing beer to drink. The first known record of hopped beer was in the writing of a German Abbey in 822, and by 1200 many monasteries were adding hops to their beer.

Besides providing beer to surrounding communities, the monks also drank the beer themselves. A typical daily ration was up to four liters per day (roughly two six packs). Beer supplied the monks with important nutrition and was inexpensive compared to other foods. This was especially important while fasting during Lent, when many monasteries doubled the beer ration.

All types of beers were brewed, with the strong beers (as high as 10-11% alcohol) generally being consumed by the monks.

After putting away two to four six packs of 10% alcohol content beer, the monks needed a way to burn off those extra calories (not to mention the effects of alcohol). Most historians date the origins of tennis to French monastic cloisters in the 12th century, when inebriated monks began the game – striking the ball with the palms of their hands.

By the 16th century, rackets were introduced and the game became immensely popular in both France and England. Between getting marriages annulled and having wives executed, Henry VIII of England was a huge fan of tennis. 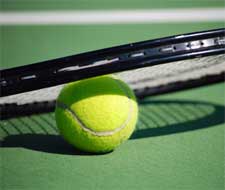 Modern tennis courts are 27 feet wide for singles and 36 feet for doubles. The court length is 78 feet. In order to have adequate space to play in a tennis court building, another 12 feet should be allowed for on each side, as well as 21 feet at each end.

The USTF (United States Tennis Federation) describes the following for ceiling heights: “The space directly over the court should be free of overhead obstructions and there should be not less than 18 feet at the eaves, 21 feet over the baseline and 35 feet at the net, although 38 feet is recommended, measured to the interior finished ceiling.”

Pole buildings make for great permanent covers for tennis courts. An ideal tennis court building should be no less than 60 feet wide by 120 feet long, with a 36 to 40 foot eave height. Parallel chord or “flat” trusses may also be used as roof purlins, running the 60 foot direction. In this case, the eave height can be greatly reduced, and columns can be progressively longer as the net is approached, giving the interior clear height required. This method also allows for a series of courts to be placed side-by-side in configurations such as 120’ square for two courts, 120 by 180 for three, etc.

Whether a monk or a serious player – if you want to play a lot of tennis and do it out of the weather, a pole building could very well be the ideal solution.

Say What? Find A Professional Contractor
One of the things I make myself available for is w...
Dear Pole Barn Guru: What Is Wainscot?
What is Wainscot? Welcome to our newest feature: ...
Struggles to Define What a House Should Look Like
With barndominiums, shouses and post frame homes r...