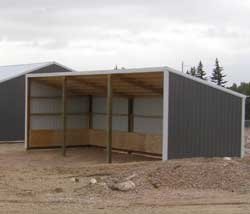 As a pole building “newbie” the first pole building I constructed back in the Spring of 1981 happened to be a 20 foot by 36 foot three sided loafing shed – with a single slope roof. As a builder, I didn’t make much money on it, as basically my head was still caught up in a stick framer’s mentality (studs and rafters go up and down, girts and purlins go left and right). Dealing with several feet of grade change was also something I was unaccustomed to, it was much different than having the level top of a concrete foundation to work from.

My second building was a 24 foot by 96 foot single slope roof, which was built over existing cattle pens! The pens were a challenge to work over, but at least the site was level.

Neither one of these experiences caused me to see single slope roofs as the less than ideal solution to most pole building needs.

In my humble opinion, in most cases, single slope roofs are neither aesthetically pleasing, nor the most cost effective solution. However, for small (say 12 foot in width by any multiple of 12 feet in length) run in sheds for horses or cattle, they may prove to be economically the best answer.

What are the most common reasons people select a single slope roof?

The top reason – the mistaken belief they will somehow be less expensive.

Most steel roofing manufacturer warrantees are void on roof slopes of less than 3/12. In order to keep the warranty in effect, this can quickly cause the “high” side of the building to become very tall.

Using the most common roof slope (4/12) a 24 foot wide building will be EIGHT FEET taller on one side than the other! From a structural aspect, building columns act as beams to resist wind loads. The formula for a simple span beam includes the square of the span – think of a 16 foot height having to carry FOUR TIMES the load of eight foot! The resultant is some potentially very large columns.

The resultant is paying to enclose a large area, in cubic feet, which cannot be practically or easily utilized.

The second most common reason for single slope roof, is so the weather (rain or snow) runoff will all travel to one eave side. This becomes more commonplace in snow country, where snow removal in front of sidewall doors can become a constant work in progress.

Rather than single sloping, it would be far less costly to use a pitched gable truss, with snow brakes to actually keep the snow on the roof and from sliding off in piles in front of doors. Having all of the snow slide in one direction could result in a crushing weight of snow piling up against the low side eave wall – buckling the siding, if not causing a catastrophic collapse.

Roof slope should be no less than 3/12 to maintain steel warrantees.

If desiring a clearspan, the overall height of the roof trusses should be no more than 12 feet. Many roof truss fabricators are limited to the ability to build trusses 12 feet in height, and for those who can, shipping becomes an issue as special permits must be acquired as well as pilot vehicles – adding to the expense.

In the event the single roof slope is fairly flat, and the clearspan width is greater than what can be supported by dimensional lumber or LVL (Laminated Veneer Lumber https://www.hansenpolebuildings.com/blog/2013/01/lvl/) rafters, prefabricated trusses are going to require added heel height (truss depth) at the low sidewall. This can result in a decreased ability to utilize all interior aspects of the building, as truss members will be taking up several feet of space below the low eave height.

Interior columns may need to be added to reduce truss costs, or get spans down to dimensional lumber manageable distances. In many cases, interior columns can get in the way, especially if the building is ever re-purposed.

Lofts – while the numerous feet of added height along one eave might prove to be a wonderful space for a second floor, consider the loss of headroom as the tall wall is moved away from. In most cases, those single sloping trusses will not lend themselves well to supporting a usable attic space within the truss. If so, then interior columns will need to be added to support the loft floor.

Doors – be wary of placing doors on the tall sidewall which are equal to or greater than the height of the low sidewall. While tall things might be able to enter the doors, those very same tall things will eventually run into the roof. With prefabricated trussed roofs, the lateral bracing between bottom chords and webs will be in the way.

Considering a single slope roof? Carefully weigh all of the options to insure it is the correct design solution for your circumstances!

Plasti-Sleeves®
For clients who are concerned about column rot, de...
When Life Changes in the Blink of an Eye
Judy Hansen is a Registered Nurse, who generally w...
Design Review is Important Component!
DEAR POLE BARN GURU: I am building a pole barn 50 ...