When Four Sides are Less Expensive than Three

Imagine, if you will a balloon.

If the opening is shut, it is pretty hard to blow any more air into it. Open it up, blow into it and it expands as the air pressure on the inside is increased. 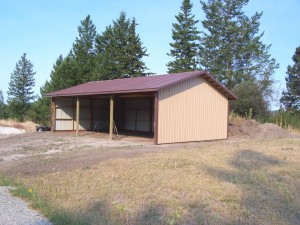 Now picture a pole building with one of the walls open – when the wind blows, the inside pressure is increased, causing the building to want to expand (which is not a good thing).

Why would a three sided building be planned for in the beginning?

For many years, the traditional farm machine shed had one long side open – this allowed for equipment to be driven in the open side and parked out of the weather. Being a farm, security was not much of an issue, keeping the weather off and ease of access were important.

In more recent years, leaving one side open has been looked upon as the possible solution to budgetary crunches….get the building up, things out of the weather, then complete the fourth wall with doors in it at a later date.

Only one problem with this scenario – the three sided building is trying to expand!

This was recently the case with a 40 foot side, 60 foot long, 12 foot eave building I had priced. When the fourth side was left open it raised all kinds of havoc with the structure. All of the columns and roof purlins, as well as some of the wall girts, had to be made larger to withstand the added wind pressure. Connections had to be added, etc. Even the trusses had changes.

The end resultant, the fourth side including two 12 foot wide sliding doors and an insulated commercial steel entry door could have been added – for nearly the same price!

Before looking at a three sided pole building as being the answer to budgetary woes, check and see the price difference to fully enclose your new pole building. The “savings” for leaving one side open may be non-existent.

Clear Span Truss Length, Loft Support Columns, and...
DEAR POLE BARN GURU: What is the widest clear span...
Contractor Bonding
I was a general contractor for years, registered i...
Building Materials List: Mr. Jim Poses a Request
I recently posted a blog entitled, “Why a Material...