Besides introducing the Japanese to glulam lumber, we worked to promote 2×4 construction. For centuries homes have been built in Japan with 90mm x 90mm (approximately 3-1/2 inches) square posts and beams. The small-dimension materials are not very strong, so the posts are usually only about 6 feet apart. The same material is used for diagonal bracing. 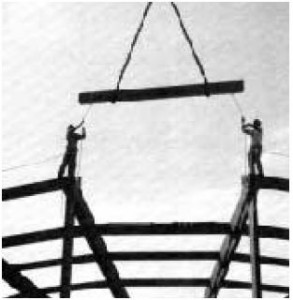 Once the roof (usually tile) is on, the structure is reinforced with 2×3 studs toenailed vertically between the posts and the bracing, and flush with the exterior. That leaves the areas between the posts crowded with studs, making it more complicated to get in there with insulation, plumbing and wiring. The 2x3s are covered on the interior with a thin plywood or grass-cloth skin, leaving the posts and bracing exposed. Sound travels through walls as if they weren’t there.

We tried to convince the carpenters that a heavy plywood could handle the shear movement, thus eliminating all that diagonal bracing. But traditions die hard in Japan and although our suggestions were greeted with bows and smiles, nothing changed.

Trenches for concrete footings are dug by the smallest crawler-backhoe I’ve ever seen. No description fits them better than “cute”. But their work is precise since forms are rarely used, although a batterboard usually set for grade. Once the footings are in, form panels are set 6 to 8 inches above grade, and the foundation is poured 1 inch lower than its final height.

That last inch is composed of a rich, hand-mixed topping cement. Instead of using a screed, a series of 1x8s are shot in level with a transit and nailed to the green foundation walls to serve as a guide for the 1-inch final pour. After this has hardened, holes are drilled and anchor bolts set.

All this struck me as an incredible waste of time, In fact we had meetings about it for two days. But in the end, I was told that although our way is probably better, they intended to use their own methods. I bit my tongue.

While some of the finest power tools available are made in Japan, a lot of the work is still done by hand. Since most of the country uses only 100 volts, we didn’t bother to take our own power tools. But we were up the creek once we got there and realize standard tools, like routers, weren’t available at the site.

If we asked for a power tool it usually appeared. But at times, when they didn’t understand our need for it, our hosts would tell us the tool wasn’t available. We would counter with, “You make it over here and you tell us you can’t get it. Let me see the catalog.” After pointing out what we wanted, the unavailable tool would materialize. Once we demonstrated how we used that tool, they were quick to adopt and even improve upon our methods.

To the Japanese, a 16-oz. hammer is considered big. They were shocked by our 22-oz. scored-head framers. A few tried them but quickly went back to their smaller ones.

Getting an adequate air supply for our nail guns was another problem. They had either small compressors that forced us to wait every few shots for the pressure to catch up, or huge ones normally used to run jackhammers. We ended up using the guns to start the nails while a man followed behind finishing the job by hand. Next trip, my 1-1/2 hp Emglo goes with me.

A Tradition of Craftsmanship

There are two classes of carpenters in Japan: those who learn traditional building techniques through apprenticeships and those who are trained largely as they work. For the latter, production is the key. Used to working with manufactured housing, their skills are more like those of assembly line workers.

Apprentice carpenters, on the other hand, go through a rigid apprenticeship lasting about nine years. During their training, apprentices learn to fit materials together so skillfully that it looks as if the wood grew that way. To watch them work is to learn a whole new respect for craftsmanship.

During my trip to Fukuoka, the carpenters used about 400 4x4s for girders. These were crossed with 2×6 floor joists about 16 inches on-center. All of these were fit together with a joining method similar to dovetailing. It was hard to believe the number of cuts involved – each with its own peculiar angle.

The top Japanese carpenter and his apprentice spent most of a day using a pencil and a square to mark the cuts. The next day he simply picked up a saw and, without even bothering to set the blade angle, cut the notches as fast as his assistant could turn the beams. Though he never changed the setting, his mastery of the saw bordered on the artistic. Most of my crew gathered around to watch for a while. Before returning to work, we honored his skill with a spontaneous round of applause.

Our framing work at each site ended with a traditional “muneage” or topping-out ceremony, to thank the gods for letting us raise the structure. The building was draped in American and Japanese flags and a band played while many toasts were drunk with Japanese rice wine. True to their ways, our hosts planned every second of the ceremony, from the number of drum beats to accompany the lifting of the last beam to the time it took for us to attach the beam in place with gold-plated brackets and bolts. Then a cannon was fired, nearly blowing us off the building.

In both Osaka and Fukuoka, the ceremony also symbolized the cooperation required to get the structure framed. In spite of different languages, tools, and traditions, we were successful at completing our work. We also learned a lot from one another and had a lot of fun.”

Posted in memory of my Uncle Neil– truly a skilled framing contractor – and craftsman.