My loyal readers are going to be amazed at how I manage to tie these two subjects into relating to pole buildings.

To find out, please read on……

For those who are old enough to remember, the 1991 Super Bowl featured the Buffalo Bills and New York Giants. The high flying Buffalo Bills had scored 95 points in winning the two playoff games to get into the Super Bowl, and broke out to an early 12-3 lead. The Giants came back to hold a 20-19 lead as Bills placekicker Scott Norwood lined up for a game winning 47 yard field goal with eight seconds on the clock.

The kick was up – it was long – and it was wide right of the goal post by a foot…..leaving the long suffering (their city’s last championship in any sport coming in 1965) Bills’ fans in agony.

On Saturday night, January 26, I had tucked my five month-old-daughter Bailey in bed and settled in for a long winter’s nap to rest up for the big game the next day. I’d been remodeling my grandparent’s 1909 lake cabin into a year around home – including replacing the ancient Model T garage with a new pole building large enough to park our two vehicles in.

In the middle of the night, I received a call to tell me my new garage was on fire and it was being put out by the Newman Lake Volunteer Fire Department!

It seems the electrician had energized the electrical service to the garage on Friday afternoon, and left it on. Somewhere in the building, a wire was grounded out in a dead attic space. It smoldered from Friday afternoon until very early Super Bowl Sunday. Luckily, one of my summertime only neighbors had decided to brave a winter overnight in their cabin, had gotten up in the wee hours to get a glass of water, and spotted the flames out their kitchen window!

Thanks to the quick response from the fire fighters, most of my pole building was saved – however the contents suffered significant smoke and water damage. This has caused me to be an ardent supporter of our local Fire Department.

Fast forwarding to 2014 – our Fire Department has outgrown its 48 year old current station and had nowhere upon the site to add onto the existing building. The Department owns a 12 acre parcel for a new location and in April voters approved a $1.1 million 20 year bond measure to pay for ½ of the construction costs of a new Fire Station.

The over $2 million new station will house four to five emergency vehicles plus a 5,000 square foot “house” for the fire fighters. My share of this will raise my property taxes by about $120 per year.

While I believe the fire protection improvements will be money well spent, my concern comes from potentially having a building which becomes an edifice to the architect, similar to the two other fire stations which have been built in the eastern portion of our county over recent years. 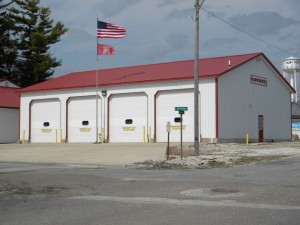 I’ve been involved in several pole building fire houses over the past decades – they are immensely more affordable than their block and stone counterparts and let’s face it – those fire trucks are just as happy out of the weather in either building.

If your Fire Protection District needs a new fire station, I can’t stress enough at looking towards a pole building as a practical and affordable solution.

Oh, and Scott Norwood? He played only one more season in the NFL, following his Super Bowl debacle, making good on only 62% of his field goal attempts. He is currently selling real estate…..in Buffalo!

Adding a Pole Barn on to Loafer's
Loafer’s Sports Bar and Grill Back in one of my e...
Vinyl Siding for Pole Barns
When it comes to pole barns (or more appropriately...
Dry-Set Column Anchors
I’ve always been a fan of the traditional pole bui...