The Theory of Adequate Building Connectors

I was blessed to have been a member of the then American Society of Agricultural Engineers (ASAE) Structural Committee back in the latter half of the 1980s. Blessed because there were many brilliant engineers on the committee who were very focused on moving what had been “pole barns” into the Code conforming “post frame” buildings.

One of the engineers I had the pleasure of working with was Patrick McGuire who, at the time, was chief engineer for Borkholder Buildings in Napanee, Indiana. How good is Patrick? Good enough to receive the NFBA’s (National Frame Building Association) highest honor, the Bernon Perkins Award, in March 2006.

Patrick McGuire was chair of the NFBA Technical and Research Committee for over a decade. It was Patrick’s vision which led the way for acceptance of post frame design into the International Building Codes.

I’ve always respected Patrick for not just being “in the know”, but also because he has worked in the industry, rather than being an academic. When I wanted to know more about the workings of post frame buildings with sidewall columns spaced every eight feet, and trusses every four feet on top of “carriers” (headers) – Patrick McGuire was the man I contacted.

Patrick’s concerns were in the lack of adequate fasteners between truss carriers and columns, especially since many of this style pole building are constructed with not only no engineer’s review, but even worse – most had no drafted building plans!

The interactions between myself and Patrick have led me to really think about all of the crucial building connectors necessary to create a properly designed pole building.

It matters not if the best and strongest individual components are utilized in the design and construction of a new post frame building, if the pieces are not adequately fastened together. What good is a bunch of pieces if the “glue” is no good? 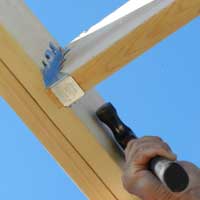 The cleanest and safest designs are ones in which members directly bear upon each other, as well as those which rely upon engineered building connectors (such as hangers and brackets manufactured by companies such as Simpson Strong-Tie®). Pole buildings which have fewer pieces (albeit possibly larger) also have far fewer connection points, reducing the probability of a failure due to either under design or under (or incorrect) installation.

Proper post frame design is best done when each connection is calculated to be able to withstand the climactic conditions (wind, snow and seismic forces) as well as weights of materials which will be applied. Well detailed plans will spell out every connection – so the designer’s intent is fully clear. The person(s) constructing the building and the Building Inspector should work together to ensure building connectors are adequate to meet the plans.