This was written by Cheryl PaPania (and posted on Facebook), who is an expat living along the coast of Ecuador with her husband Don about his “man-cave” pole building:

“January of 2007 my husband, (Don) built a workshop to store his tools, equipment, etc. and also have a place to work out of the sun. He attached two bays to park his boat and man truck (Old Blue). It was built quickly out of wood, cane and palm leaves. Not the most attractive structure, but it was functional. And it was supposed to be “temporary”. Well six years later, it was in such a state of disrepair. It was infested with termites and so rickety to the point of being dangerous. So several months ago, Don hired a couple of guys to help him tear it down and burn it. As he stood by the fire watching the last of the rotted wood burn, I saw a few tears roll down his cheeks. They were not from the smoke.

So now there is no man land. Talk about withdrawal, wow. Almost like taking an alcoholic’s last bottle of booze. No he did not have the DT’s or curl up in the fetal position, but believe me he was very despondent. So one day we are sitting on the porch having our afternoon cocktail and I casually mentioned rebuilding man land. Talk about lighting a fire under someone’s ass, he shot out of his chair, dashed into the house and came back with his notebook. I am thinking he was going to start making notes and drawing a design on paper. Hell no, he had drawings, layout, plans that would impress Frank Lloyd Wright. Like a kid at Christmas, he showed me his plans, including plumbing, electrical and structural specs. He even had a detailed list of needed materials. Only thing missing was “soil test”. Oh and the whole structure is being built out of concrete, brick and steel. One would think Armageddon was coming or some kind of terrorist attack. 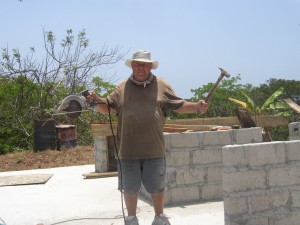 So very next day Don gets started. He laid it out visually. Then string lines and levels to make it perfectly squared. I held the end of the tape measure, called the “dumb end”. After about three hours he was satisfied, only less than 1”out of square, which he could live with. If only I could get him to show such enthusiasm toward “The Honey Do” list.

I am very proud of Don, to save money he has built this with very little help other than the day the slab was poured and help finally for one day completing the roof structure and roof panels. Don has measured, cut, drilled, welded, bolted and painted all the steel. He built 3 brick and concrete work benches. Installation of water lines in several areas along with a sink and shower. He also has installed all the electrical, including 220 for the welder, lighting, motion sensors and nighttime security features.

There are still a few things left to finish (wall around outside shower, locker or cage for
additional tools & machinery to be securely stored and few misc. things.) However for all practical and functional purposes, MAN LAND or his MAN CAVE is finished. I have attached some pics from beginning to end. Only thing of importance that is missing is the BEER FRIG!! Guess this will be a Merry Christmas for Don.”

For many – a pole building kit package, with totally detailed plans and step-by-step instructions is the yellow brick road to man land success! With a little help from your friends at Hansen Pole Buildings, you too can be deciding where to place the beer fridge