Back in the day (July 1988 to be more precise) I had purchased a brand new black Jaguar XJ6. This was one seriously beautiful car. The first night I took it home, it had to be parked in the driveway, as the garage space had not been rearranged to allow room for it. The next morning, when I went out to get the newspaper, I saw someone had decided to key scratch it down the entire length of the passenger side!

Although it isn’t a key scratch, this story probably elicited similar profanities to the ones I had used. (And anyone who knows me – knows I rarely use words like that!)

We have a client in Colorado who just finished constructing his brand new Hansen Pole Building. He also spared no expense in designing what, for him, would be the ideal dream building. By the features included, it was easy to tell this was going to be a building done right (we love these types of clients)!

Once his building was completed, he wanted to have continuous gutters installed on the building.

To find out more about seamless gutters: https://www.hansenpolebuildings.com/blog/2012/09/rain-gutters/

The gutter installers chosen by the client, did make an excellent recommendation,  in advising the client snow breaks would need to be installed on the steel roofing, otherwise sliding snow would pull the gutters off from his building.

For my adventures in snow brakes: https://www.hansenpolebuildings.com/blog/2012/02/snow-brakes/

Here is what happened next, in the client’s own words, to the gutter company after installation: 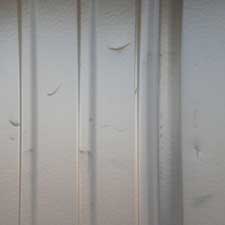 “ I was on the scaffolding checking out the snow guards I had installed 4 weeks ago.  What I saw was very disturbing and irritating.  The upper areas of the steel siding on the north wall, where the guys placed their ladders is damaged.  It is marred, scratched, and dented.  My contractor and myself installed the steel siding.  We were so very careful not to damage the steel siding as it was installed (no ladder was ever used…only scaffolding).  If you recall, during our conversation on the day you stopped by with the color samples, we discussed my concern that any ladders used would damage the steel siding.  You assured me that the steel wall would be fine and that the equipment and the installers would do no harm. “

Just like with my new Jag, I am certain the building owner was heartbroken. I can so relate.

What is unfortunate is, with a little foresight, this could easily have been avoided. When I first even had an interest in pole barns, I picked the brain of an old time pole builder, who shared with me a few of his tricks of the trade. One of those was, any time he or his men had to lean a ladder up against the side of a building, they always took off their coats, and placed them over the top end of the ladders (placing the top of each side rail into a sleeve). The coat kept the steel from being scratched or scuffed.

They then would only align the top of the ladder, with where a row of screws was, as this would indicate solid wood behind the wall steel, so there would be no dents.

A slightly more expensive (but cheaper than replacing a wall of steel) is the use of a product called a ladder stand-off. Several versions are available, however I would highly recommend the use of ones with padded feet which would go against the siding.

Avoiding scratches and dents doesn’t have to be costly – but with a little time and forethought, there is no reason damages to siding or roofing materials have to occur….ever.

And yes, I wish I’d taken the time to rearrange the garage before I put my new Jag in it.  “An ounce of prevention….”

Screw Ridges or Valleys?
Screw Through Ridges or Valleys? Today’s article...
Replacing Panels, Rebar in Column, and Wholesale P...
This Wednesday the Pole Barn Guru answers reader q...
Screw Holes: Predrill or Punch?
I happen to be very, very picky about how a finish...