…even close to home (or home of Hansen Pole Buildings anyhow) in Roberts County, SD! 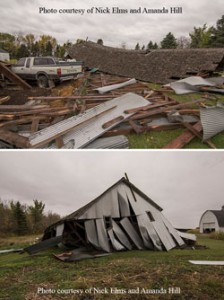 Friday, October 11, at 5:25 p.m. a tornado touched down about 10 miles northeast of Dumont, (just across the border into MN) in a soybean field. As the tornado moved to the northwest, it struck a barn which suffered significant structural damage. The steel siding from the barn was found over 50 yards away, with one piece speared eight inches into the ground and stuck standing upright!

The damage was consistent with an EF-1 tornado with estimated wind speeds from 95 to 105 mph (miles per hour).

Under the 2009 and earlier versions of the IBC (International Building Code) the design wind speeds for Minnesota, North and South Dakota are 90 mph (miles per hour). Obviously this tornado did not read the Code books, and ramped up right past the design speed.

In looking at the damage to the barn in question, my educated guess would be this building was not designed to any particular wind loading. It appears to be more of a “throw it together and see if it works” type design.

Most people do not have a real good feel for how design loads are determined. For structures with a low risk to human life in the event of failure (Occupancy Category I), the design loads are such as the building will be loaded BEYOND them, on average, once every 25 years. For homes, or similar occupancies, once every 50 years (Occupancy Category II).

This does not mean the critical event will occur against a barn once every 25 years, it means there is a 4% probability of it happening, in any given year. It could happen two years in a row, or not for 100 years. Probability works like this.

In the event owning the last building standing is important, it is a simple matter to increase the Occupancy Category, and usually with little or no cost. Want to really “beef” things up? Category III would put the building in the same risk class with structures which represent a substantial hazard to life in the event of failure (most schools fall in this arena).

Or, really go for it with Category IV, which includes essential facilities such as hospitals.

Another way to achieve a greater degree of safety, is to design with faster wind speeds, or greater snow loads. Check out all of these options, they may prove to be less expensive than you thought!

Furniture Making from a Barndominium
A year and a half ago, Michael Gibson had what he ...
Wide Clearspan Sheds Using LVL's
Back in 2007, we designed and provided a pole buil...
Engineered Pole Barn
This is Why Pole Barns Should be Engineered A lin...