Home >> Pole Barn Design >> OMG It Might Be a Pole Barn

The following story by Zack McDonald appeared in the October 17, 2013 Panama City, FL The News Herald:

“PARKER — Residents may want to hold off on building any pole barns, carports, garages or storage sheds in their front yards within the next three months.

They might be asked to remove them at their own cost.

Residents generally must get a permit from the city to put such structures on their property. However, after council members approved a moratorium during their most recent meeting, all accessory structures in front yards will not be allowed for at least a 90-day period.

Halting the construction or placement of those structures came at the behest of the city’s planning board.

James Bearden, resident, came before the council to request a setback variance for a carport built about one foot beyond his property line. But when the city started looking at the structure, it looked a little more like a pole barn.

Or maybe it didn’t.

The city’s Land Development Regulations (LDR) does not define “carport” beyond it must be “attached to the principal structure” and used to store vehicles, according to the LDR.

“Everybody knows a pole barn when they see one but defining it is more difficult,” said Mayor Richard Musgrave. “We thought it would be better to define it so any homeowner would know the difference.”

Another problem arose with the definition of “attached.”

“It should look like the original structure so it looks like it was all built at same time,” Musgrave said. “We let homeowners define attachment as having a simple aluminum covering. In my world that is not attached.”

The planning board requested time to look at language to better define which structures would be allowed in the city and which would not, and also will be looking at several other terms within the LDR. Council members agreed 90 days would be long enough but the moratorium can be extended.

The moratorium went into effect Tuesday evening, and the variance requested by Bearden was eventually rejected by the council.”

Here is my take on this story:

First of all, if someone constructs a building without obtaining appropriate permits, they should have to either prove the structure conforms to regulations (and be appropriately penalized for not getting authorization in advance), or be required to move or remove it.

Secondly, I object to the broad use of the term “pole barn”, specifically as referenced in this instance, as it appears to have a negative connotation. Pole (aka post frame) buildings, most certainly do not have to look as though they were dragged in off “the farm”.

Third, “everybody knows a pole barn when they see one”? When designed and used as a barn, maybe. In my career, I’ve designed, built, and/or provided literally thousands of pole buildings, which could not have been distinguished from any other form of construction, had I not pointed out to others, yes indeed, it is a pole building. Pole buildings can be sided or roofed with any type of material which could be applied to any other structural system.

IMHO (In My Humble Opinion), attached is pretty easily defined by Webster as:”connected or joined to something”. Pretty simple, either it is or it isn’t, and whatever the structure is sided or roofed with, has nothing to do with whether it is connected.
Post frame construction is a Code conforming structural system. Any attempt to legislate out the use of this, or any other conforming system, could open up a municipality to a plethora of potentially expensive to defend legal actions. 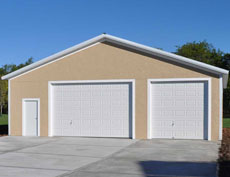 If the objection is to siding and roofing materials only, which do not match an existing structure, the solution would be to require conformance, by adopting appropriate language.  The framework is what determines if it’s a “pole barn”, and not what you see covering it.

I have hundreds of photos of “pole barns”….from garages and sheds to houses with dormers, decks and lofts… and I challenge anyone to be able to look at the exterior and determine if they are pole buildings….or not. Take for example the picture above with stucco siding…this is not your typical pole barn.