According to TKProduct.com: “Drying shrinkage is an inherent, unavoidable property of concrete. Shrinkage of plain concrete drying is .72 inches per 100 feet from its plastic state to a dried state with 50% relative humidity, this shrinkage will take place when the moisture leaves the concrete.” 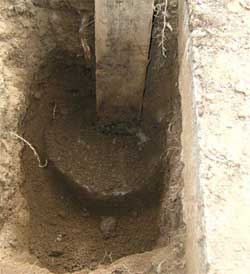 Now this research, on my part, was triggered by a recent response to one of my blog posts, where a reader was concerned about columns and concrete encasements shrinking away from each other.

Keep in mind, the typical concrete column encasement (as least as we or our engineers typically design) has the upper side of the encasement approximately 22 inches below grade, is 18 inches in thickness and most often 18 or 24 inches in diameter.

Contributing factors to shrinkage are an increase in wind velocity (this would come into play for surface level pours), ambient temperature increase and/or a decrease in relative humidity.

Of course at soil depths greater than 30 feet below the surface, soil temperatures are relatively constant and corresponds roughly to the water temperature measured in groundwater wells 30 to 50 feet deep. This “mean earth temperature” can be as low as just above freezing in Northern Minnesota, to the mid 70’s in Florida and Texas.

In any case, the temperature of the soil in the area of concern, is going to remain fairly constant during the curing of the concrete encasement and will be affected minimally by any above surface temperature changes.

Concrete has a coefficient of thermal expansion and contraction of about 0.0000055 in./in./°F. After hardening, concrete will contract as a result of cooling after the peak heat of hydration (typically coinciding with drop in ambient temperature at night). A 40°F drop in temperature between day and night can cause about 1/32 inch of contraction in a 10 foot length of concrete. Keeping concrete placement temperatures as low as possible helps to decrease the magnitude of the contraction.

Back to the question at hand….

From my research, it appears concrete shrinking away from the columns in any sort of significant distance, would be most probably due to one or more of the following conditions occurring: the hole (or top portion thereof) being completely filled with concrete – which would allow the surface to be subjected to temperature and humidity fluctuations and/or the concrete mixture having too much water in it to begin with.

From my 33 years of experience with pole buildings: To date, I have never seen a pole building with posts encased in concrete pull out  of the ground, either with or without the surrounding concrete pier.  I have, however, seen buildings “turn turtle” which were placed on top of concrete cookies in holes, then backfilled with dirt.