Roof Leaks: Another Case for the Barn “Detective”

The story you are about to read is true, only the names have been changed, to protect the innocent.

Now my name isn’t Friday, and today is Thursday. A busy Thursday, just like most, with the phones ringing and everyone scurrying to assist with clients. 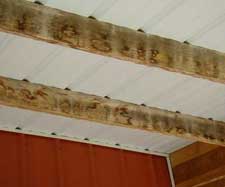 An incoming caller reported a “crime”. They had purchased a Hansen Pole Building kit package back in 2004. As the caller stated, “We have a problem with twisted wood on the roof, black mold and condensation.” She says they had insulation – vapor barrier installed between the roof purlins and the roof steel. She also stated she had called before about the twisted wood problem, but it is much worse now. Worse, they had several roof leaks.

Detective Eric checked the Hansen data base for wants and warrants, but found none, nor did he find any instance of the client having called in to report twisted wood issues in the past. Keeping records of every email and telephone conversation is integral to a company being able to accurately research this type of problem.

Calling the client, he asked for, “Just the facts ma’am”.

Upon being questioned, it turns out the roof of their pole building had been leaking for years, due to improper installation. The roof leaks caused the roof purlins to get wet; they would then dry out, until the next rain. This cycle repeated itself countless times over eight years. With each successive wet-dry cycle the 2×6 lumber for the purlins (which was Select Structural dry Douglas-Fir) progressively twisted.

In instances where wood is chronically exposed to water, wood decay fungi and mold can invade. Decay fungi can penetrate more deeply and attack the structural polymers in the fiber, reducing the strength of the wood.

Sadly, the root of the problem – roof leaks, was not reported to the builder immediately when found, as the majority of leaks can be easily repaired, if promptly addressed. Instead, the problems just became worse, as the roof framing lumber warped and decayed from excessive moisture – not from any condensation. Roof insulation is designed to prevent condensation caused by warm moist air in the building, contacting the underside of the cooler roof steel. It is not designed to prevent or minimize leaks.

The best solution at this point – remove and replace the roof purlins which have been damaged, and reattach the roof steel to those purlins with new screws. Far more costly in labor, than in materials.

My best advice is – if a contractor has been hired to perform erection on a pole building, and something is not performing as it should be, contact the builder immediately for a fix.  And not the people supplying the materials….eight years later.