When I built my first few pole buildings, over three decades ago, I was smart – I was the layout man and the other two men on my crew were the ones who got to use the dreaded “two man killer”.

I have to admit, the “killer” was a huge improvement over using a two-handled double shovel (aka clam shell). Two man killers are gas-powered auger post hole diggers, which are available at many power tool rental outlets.

Now what exactly is a “two man killer”?

Back in the day, it was what resembled the Briggs & Stratton engine from a crude mini-bike. Now-a-days, even companies like Honda manufacture an 85cc motor for earth augers. The engine is typically mounted in a tubular steel cage. Attached to the cage are four handles, two for each victim. Attached to the engine, is an auger bit (which is available in various diameters). For deeper holes, an extension shaft is available. 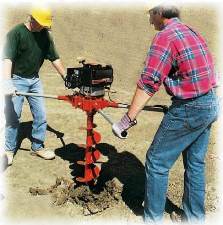 These machines are actually designed for digging post holes for fences, or planting trees. Generally they are not made to power an auger bit of more than a 14 inch diameter.

For pole buildings, however, holes for even small buildings are 16 to 18 inches in diameter, and often two feet. Clearly the augers are just not built with the idea of digging holes of these sizes.

My first two experiences with these augers, were on sites which were generally sandy loam for soil. Not too many rocks and no tree roots. Building number three was not so good. I was busy doing my thing, with the other guys digging about the fourth or fifth hole. About two feet down, they hit something not so friendly underground – the auger bit stuck and the drive motor was spinning around with one of them hanging on for dear life. After I stopped laughing at them, we decided jointly to graduate to heavier machinery to dig holes on future jobs.

Word to the wise…it is well worth the money not only for the labor involved, but safety as well, to rent a bobcat (skid steer) with an auger attachment.  The auger bits are designed to drill the holes needed by a pole building.