Building on a Sand Dune

The nice thing about being in the post frame building industry, is whenever one begins to believe they have heard it all….someone comes along with a scenario which had not previously be considered.

Recently we were contacted by a client who wanted to construct a new post frame building – on a sand dune. My sand dune experience is limited. I was 16 before I actually ever experienced a sand dune in person….at Bruneau Dunes State Park in Southeast Idaho. They were pretty amazing, to me – right out of some camel jockey movie!

Somehow, my head tries to always place sand dunes (in spite of my own teenage experience) along coastal areas, and where it is warm – like the Carolinas, or the Sahara. When I lived in Oregon, I had friends who used to dune buggy down along the Oregon coast.

This particular client was not where I would have expected sand dunes – Michigan. But, all the same, he had a challenge and it was best solved by having a new pole building. 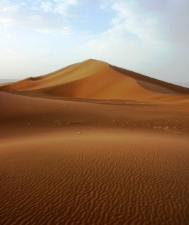 Typically sand dunes are nature’s buffer strip between land and sea. They provide a natural defense against erosion from the water, as well as the inland drafting of sand from the wind.

We humans can cause some nasty issues, by removal of vegetation from dune areas, as well as from constructing roads through and buildings upon them.

While this may seem obvious – sand dunes are made of….sand. Sand is highly mobile, put a little wind behind it and off it goes. When vegetation is removed, accelerated erosion of the dune can occur. This can cause the undermining of building foundations. Once this process begins, it is fairly difficult to reverse and the potential lack of stability can result in building failure.

Considering building in a dune area? Disturb as little of the vegetation around the building site as possible, as it keeps the sand dunes stable by holding the sand together.

Sand dunes being generally close to large bodies of water (like the Atlantic Ocean) create other risks in storm situations. Even a stable sand dune, on an exposed beach, can be attacked by storm waves and be transported out to sea. These situations are pretty much beyond human control and building nearest to the frontal dunes are most at risk.

Prior to considering building within a sand dune area, it is prudent to be discussing with the local planning and building departments.  Significant fines can be levied for not following environmental restrictions when building. In some instances, building owners have been forced to remove their new buildings and restore the natural habitat, entirely at their own expense.

There may also be a social stigma attached to building in a dune area. Other members of the community may see the construction as negatively impacting the dune ecosystem – and create grief for the new building owners, even when all of the proper steps and procedures have been followed.

In the case of this particular client, his biggest concern was sand drifting against his new building, or wind blowing away the sand from beneath his concrete floor.

The solution – construct a “sand fence” (similar to those I saw along the Interstate at Livingston, MT, when I went to college at Montana State) close enough to the building to protect it from the wind and sand. It’s like a snow fence – but for sand.  You could use a chain link fence with vertical vinyl strips from top to bottom.  It just takes any fence which can catch the sand, preventing the sand from drifting in.