Nearly three decades ago, we were looking at markets to expand our thriving post frame building kit package business into. Having then shipped buildings from the Willamette Valley of Oregon into Arizona and Colorado, Texas did not feel like it would be much of a leap. 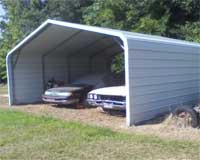 In doing research, it appeared the number one competition would be from people who were welding together sections of oil derrick pipe to use for building columns and trusses. As these buildings were not regulated by the Building Codes and were far enough away from the gulf coast to be fairly immune from the ravages of hurricanes, many of them using steel tubing probably survived due to dumb luck. Certainly no engineering was involved in them.

As it turned out, we had plenty of business close to home, so went no further at the time.

Fast forward to 2012 and Hansen Pole Buildings, by the utilization of partnerships with suppliers in all 50 states, has the ability to deliver buildings “locally” anywhere in the country.

One of my own clients happens to live in Texas and needed a building for his high quality alfalfa. Weather there is such as to allow him to harvest four times a year.  It would benefit him to be able to store crop and sell when the market was high, rather than having to harvest and sell at whatever the market would bear at time of cutting.

In discussing his building needs, he told me we were competing against a company from Oklahoma which I was unfamiliar with. The lovely thing about the internet is I was able to visit their website and get some insights into how their buildings went together.

While their website does not have schematics or sample plans to show construction techniques, it does offer some material lists. Most amazing to me, was the use of three inch square 3/16” thick steel tubing for building columns on 16 foot tall buildings. The material list online shows the steel tubing to be in 20 foot lengths, which leads me to believe the plan is to embed the tubes up to four feet into the ground!

If you were using wood columns, a 16’ tall building would normally require a 6” x 8” column, which makes me look at a 3” steel post with great suspicion.  In most states, there is little or no code enforcement.  Does that mean you should “get by” with a building which structurally is doomed to fall down?  If it were my money investment, I’d sure want my hard earned dollars to “stand up” to time.  This means following the building code, which is written to protect….me….and my hard earned dollars.  Not to mention protection of whatever I have inside my new building.

While I am personally more than a little uncomfortable with the idea of a building this size being supported by columns this small, steel tubing placed into the ground sounds like an invitation for disaster. Steel is not resistant to the type of decay it will be subject to when embedded in the ground.  It will…rust.  Just this alone would be “enough” to make me steer clear of this type of pole building construction.

Panic Mode! We've All Been There
When Clients get into Panic Mode Most of us hav...
Insulation Dilemma
A reader writes (spelling, grammar errors included...
Hart and Home YouTube Part I
Is a barndominium in your future? Considering bu...