Home >> Uncategorized >> Shouse >> A Barndominium Can Be a Carbon Storage Warehouse

A Barndominium Can Be a Carbon Storage Warehouse

Designed right, your new barndominium can help prevent global warming. By utilization of a wooden post frame structure, rather than steel or concrete, carbon can be stored (like a warehouse), rather than being released into our planet’s atmosphere.

The carbon cycle demonstrates various phases of carbon through living things, soil, water and atmosphere. If carbon cycle was in equilibrium, the rate at which carbon is removed from stores would equal the amount being taken out of the atmosphere. Current carbon cycle concerns are that it is considered to be out of equilibrium in response to human intervention.

Burning of fossil fuels high in carbon has disturbed this natural carbon cycle balance and enhanced rate of carbon returning to a gas. This increase in atmospheric carbon gas, particularly as carbon dioxide and methane, is believed to contribute to global warming and is referred to as ‘man-made greenhouse effect’ – a process where greenhouse gases trap infrared radiation in our atmosphere causing our planet to warm. 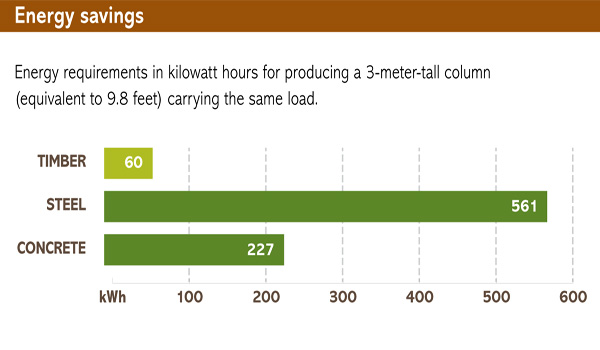 Making concrete, for instance, involves heating limestone to very high temperatures, resulting in a chemical process called “calcination.” This amounts to about 50 percent of concrete’s CO2 emissions, helping explain why concrete, the second most consumed substance on earth, accounts for around five percent of total global CO2 (carbon dioxide) emissions.

Yale University’s Chadwick Dearing Oliver, Pinchot Professor of Forestry and Environmental Studies, recommended, “Build with wood instead of steel and concrete, and we can reduce CO2 emissions by 20 percent.”

There are a number of reasons building with wood instead of other materials can help reduce CO2 emissions, as Oliver points out. For one, trees absorb carbon dioxide and release oxygen as they grow. Carbon (the “C” in CO2) is stored in the wood of the tree.

Carbon constitutes approximately 50% of a tree’s dry mass and when wood from these trees is used to produce wood products carbon is stored for life in it. For post frame buildings (such as barndominiums, shouses and pole barns) this carbon storage life is around 100 years. Carbon stored in wood is only released back to the atmosphere when the wood product is burnt or decays when it re-binds with oxygen (the “O2” in CO2) and becomes carbon dioxide again.

The amount of carbon in sawn timber logs can be calculated using average rates of recovery after processing, estimated at around  50% for softwoods such as pine. Standard moisture content for air dried timber (and wood products) is 12% or another way to look at it is that 88% of moisture has been removed. So to calculate CO2 in construction timber variables you need an air dry mass of log, percentage of moisture removed and recovery rate. CO2 sequestered in construction timber = air dry mass of saw log x 88% (oven dry mass) x 50% (carbon %) x 3.67 x recovery rate (%) Example: For a 330 pound softwood saw log seasoned in a timber yard then processed into square posts,  amount of carbon sequestered in timber posts = 330 lbs x 88% x 50% x 3.67 x 50% = 187 pounds of carbon dioxide. Remaining mill waste from processing has various uses such as providing sawdust for manufacture of engineered wood products and biomass for renewable energy production.

An average American home is roughly 2600 square feet and requires 16,380 board feet of lumber to build, weighing about two pounds per board foot (obviously weight varies by species). Doing the math, if your post frame barndominium is average in size approximately NINE TONS of carbon are being stored, rather than released as greenhouse gases!

Pole Building Using 2" Oil Pipe
I recently read this in an online forum and felt c...
Considering the Differences Between Closed and Ope...
Originally published by: Fine Homebuilding — May 2...
Don't Hire a Contractor Unless You Are Willing to ...
From The Dalles (Oregon) Chronicle December 26, 20...