Pressure-treated lumber has been available for about 60 years. Most original formulas centered on arsenic as the main preservative, to help lumber withstand the extremes of outdoor use. While over time small amounts of chemicals from treatments such as CCA may have leached out of the treated timbers, a 2004 report in Wood and Fibre Science stated soil contamination due to the presence of CCA treated wood after 45 years is minimal.

As one might expect, the use of a potentially-poisonous substance like arsenic was cause for considerable concern, particularly when children are exposed to such installations. However, a Florida Department of Health panel of physicians found no published clinical evidence in the medical literature of arsenic poisoning in children resulting from CCA treated playground equipment exposure. 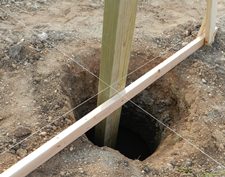 The new ACQ treated lumber contains a very high level of copper to replace the arsenic. While this reduces the desired risk of poisoning, it does present a different, but very dangerous problem: increased levels of corrosion.

Simply put, ACQ treated lumber is extremely corrosive to metal fasteners such as nails, screws, framing hangers as well as metal siding and flashings. The problem is you end up with two metal compounds in direct contact with each other in an exterior application so water contact is going to happen.  When two metals in direct contact with each other are surrounded by an electrolyte (water) rapid corrosion of the metal on the lower end of the electromotive series will occur.

Significant issues were seen early on in the outdoor deck industry. Here, standard joist hangers decayed rapidly due to the chemical interactions.

In post frame construction, the biggest concern was with contact of the pressure treated skirt boards (splash planks) with steel base trims or steel siding. Most quality providers went to isolating the skirt boards from the steel by uses of waterproof barriers and fastening the steel at the base of the walls with stainless steel screws. Nails with higher levels of zinc coating became prevalent as well, for fastening ACQ treated lumber.

The end solution was the short popularity of ACQ treated lumber. Copper Azole (CA) and Micronized Copper Quaternary (MCQ) have now become the pressure treatments of choice, as they have significantly lower tendencies towards the electrolysis issues seen with ACQ. While MCQ is less corrosive to metals, one of the “big box stores” continues to recommend the use of galvanized fasteners with it.