Why Wetlands are Important

In the past year I have written about some fairly diverse construction issues. Today I will be discussing one which frankly, my prior knowledge of, was limited.

Having provided thousands of buildings in Western Washington, I have listened to decades of prospective clients singing the blues about “wetlands” issues. Washington seems to be extremely sensitive to wetlands issues, and preserving the state’s wetland areas. One of the Hansen Pole Buildings’ Building Designers, Bob, is faced with more than one potential project currently being delay, or perhaps entirely shelved due to wetlands designations.

I know of some who have taken some drastic measures to avoid having their property classified as wetlands. This includes those who have done things such as soaking up mud puddles, after a heavy rainstorm, with towels so as to not have an inspection adversely affect how their property was used.

It has been estimated when European settlers first arrived, wetland acreage in the area which would become the contiguous 48 states was more than 220 million acres, or about 5% of the total land area. By 1997, total wetland acreage was estimated to be 105.5 million acres. Data compiled in separate surveys and using different methodologies (and yielding different results) show the annual loss rate in acres has been dropping from almost 500,000 nearly three decades ago to less than 60,000 in recent years. 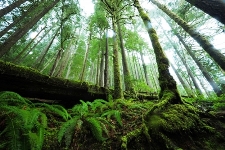 Wetlands serve as both a home and a breeding ground for several species of mammals, reptiles and fish. According to the U.S. Environmental Protection Agency, about 35 percent of the animals and plants on the threatened and endangered species list live in or depend on wetlands. The wetlands also serve as a birthing center for several species of animals and fish. Their lush plant life gives the young a chance to grow into maturity safely before moving to permanent habitat.

During rainy seasons, the wetlands absorb water from rain. The plants in the wetlands filter this water through their roots, removing impurities. As dry months approach, wetlands feed clean water up streams into other areas, allowing the ground to stay moist and vegetation to grow. This process also refills drinking water stores.

Wetlands which lie in coastal regions provide flood control. The plant life in the wetlands slows the speed of storm surges by providing a protective barrier. Meanwhile, the marshy ground in the wetlands absorbs much of the rainfall. As a result, less damage occurs to areas outside of the wetlands.

Wetlands in coastal regions prevent erosion of the coast. Without the wetlands, coastal regions would be bombarded by waves, heavy storms and hurricanes which would eventually carry sand into the ocean and erode higher lying areas. The wetlands act as a barrier between the ocean and solid land. Wetland plant life slows the speed of storms, and the roots of the plants hold the soil and sand in place.

Feeling warm and fuzzy now about wetlands? Could be, but what choices does one have if their land IS wetlands, yet you want to utilize it?  Come back tomorrow and I’ll tell you what options you may have.

Lofty Aspirations Part II: Bonus Room
Bonus Points Steep roof slopes on many homes of t...
Pole Building Prices: How Much Per Square Foot Is ...
I once overheard my lovely bride responding to thi...
Pole Building Prescriptive Requirements
In a misguided effort to make things “easier” for ...