The research for yesterday’s blog really got me searching on the ‘net for more information on fabric covered buildings. Having no real personal experience with them, it was time for me to be educated.

Articles copyrighted by the Associated Press proved to be very informative.

The company who had manufactured the collapsed Dallas Cowboy’s training facility had past issues, court records show. At least three other of their fabric buildings had fallen in heavy weather since 2002.

The other tent like facilities were warehouse-type buildings in Philadelphia and upstate New York and an indoor arena for horse competition in Oregon. All the fabric buildings fell in weather conditions which included heavy snow.

The 2009 collapse of the Cowboys’ facility in winds injured 12 including a 33-year-old scouting assistant, Rich Behm, whose spine was severed in the accident. 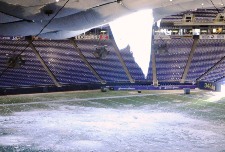 Beth Hungiville, executive director of the Lightweight Structures Association, said four of the membrane-style buildings collapsing in seven years is far from normal.

“That is certainly very unusual,” she said. “You would not usually find that many failures in that short a time.”

Hungiville said her organization, an industry group, was aware of the Philadelphia collapse, which occurred just four months before work began on the Cowboys’ facility, but it didn’t know about the others until the few days following the Cowboy’s facility collapse. According to Hungiville, the other accidents likely didn’t attract widespread attention before the failure of the Cowboys’ structure because they didn’t involve injuries.

“When people aren’t hurt or there’s no one inside (the building), these incidents can go under the radar,” she said.

When a Summit structure covering freight for the Philadelphia Regional Port Authority collapsed in February 2003, it spawned a lengthy court battle which ended with a jury awarding the port more than $3.4 million. The fabric building collapsed because of failure of the design to account for snow buildup on the roof, according to a judge’s ruling.

Another lawsuit, centers on the collapse of a building built for storing ice-melting chemicals in Fort Plain, N.Y. The suit, filed by the insurance carrier for the company owning the fabric building, states negligence caused the building to fall when its membrane was ripped during a snowstorm in February 2007.

“Our claim is, ‘This is upstate New York. Every few years, you’re going to get a blizzard. Don’t sell us this product and say it can withstand this sort of thing when it can’t’,” said William Mullin, the attorney for the plaintiff, Hanover Insurance Co.

The Oregon case arose after a rancher had a fabric building built on his property for dressage competition. The 15,840-square-foot building collapsed in January 2002 under the weight of snow which was “substantially” less than the capacity to which the structure was to have been designed to, according to the lawsuit, which has since been settled.

The rancher, James Webb, said, “If my wife had been in there giving instruction or something, it would have been disastrous.”

I’m not trying to pass judgment upon fabric buildings, just reporting what I found. In contrast, properly designed post frame (pole buildings) have a track record of withstanding wind and snow loads far in excess of the loads they were designed for, before recording any failures.

Whether a one car garage or a multi-acre facility, any building is an investment for the building owner, including the responsibility to build a safe structure.  Due diligence is best done to investigate the success or failure of any potential building system…prior to purchase and construction.

A New Pole Building: The World it be a Changing
You’ve shopped for a new pole building from severa...
Pole and Raftered Grid Stall Barns
So many considerations go into the proper design o...
Why You Cannot Find a Builder
I read and hear more and more tales of woe from pe...