One of the Hansen Buildings designers recently asked me what I knew about fabric covered buildings. He was speaking with a client who was comparing one of our post frame buildings versus a fabric covered structure.

My only up close and personal experience with a fabric structure was with the United States pavilion at the 1974 World’s Fair in my home town of Spokane, Washington. The original covering of the pavilion was a thick vinyl sheeting. It was allowed to remain until it began to deteriorate, become unsightly and was thought a safety hazard.

As I started to do more research, I found article after article about the May 2, 2009 failure of a fabric covered building with steel frame practice facility owned by the National Football League’s Dallas Cowboys. This structure collapsed under wind loads significantly less than those required under applicable design standards, according to a report released October 6, 2009 by the Commerce Department’s National Institute of Standards and Technology (NIST). 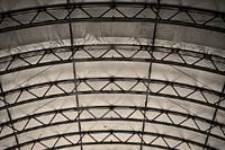 Located in Irving, Texas, the facility collapsed, during a severe thunderstorm. Twelve people were injured, one seriously. Based on the national standards for determining loads and for designing structural steel buildings, NIST researchers studying the Cowboys facility found the May 2 wind load demands on the building’s framework—a series of identical, rib-like steel frames supporting a tensioned fabric covering—were greater than the capacity of the frame to resist those loads.

Assumptions and approaches used in the design of the Cowboys facility led to the differences between the values originally calculated for the wind load demand and structural frame capacity compared to those derived by the NIST researchers. For instance, the NIST researchers included internal wind pressure due to the presence of vents and multiple doors in their wind load calculations because they classified the fabric covered building as “partially enclosed” rather than “fully enclosed” as stated in the design documents.

Even more damning, the NIST researchers determined the building’s fabric could not be relied upon to provide lateral bracing (additional perpendicular support) to the frames in contrast to what was stated in the design documents and the expected wind resistance of the structure did not account for bending effects in some members of the frame.

“Our investigation found that the facility collapsed under a wind load that a building of this type would be expected to withstand,” said study leader John Gross. “As a result of our findings, NIST is recommending that fabric-covered steel frame structures be evaluated to ensure the adequate performance of the structural framing system under design wind loads.”

The NIST report recommends such evaluations determine whether or not: (1) the fabric covering provides lateral bracing for structural frames considering its potential for tearing; (2) the building should be considered partially enclosed or fully enclosed based on the openings which may be present around the building’s perimeter; and (3) the failure of one or a few frame members may propagate, leading to a partial or total collapse of the structure.

Shortly after the Cowboys facility’s collapse, NIST sent a reconnaissance team of three structural engineers to assess the failed structure and wind damage in the surrounding area, and collect relevant data such as plans, specifications and design calculations. Using the data acquired during the reconnaissance, the NIST study team developed a computer model of a typical structural frame used in the practice facility and then studied the frame’s ability to resist forces under two wind conditions: the wind loads based on the design standard wind speed of 90 miles per hour (mph) and the actual wind loads based on conditions at the time of the collapse.

In the conversion of actual wind speeds to pounds of force applied to a building the wind speed is squared. A 65 mph wind speed creates a force of 10.816 pounds per square foot (psf), whereas the required load carrying capacity of 90 mph would be 20.736. The structure failed to carry much more than half of the wind load force it should have carried!

This evidence could lead one to be highly skeptical about the ability of a fabric covered structure to adequately support wind loads.  If one is considering such a fabric covered building, my advice would be to carefully gather evidence (backup data) to clearly substantiate the building supporting wind loads…in all circumstances.

Will Kilz Paint Stick after a Fire?
Welcome to Ask the Pole Barn Guru - where you can ...
How a Realtor Can Participate With Post-frame Barn...
Reader (and Realtor) JIM in NEW PALISTINE writes: ...
Home Addition, Combo Building, and Moisture Barrie...
This week the PBG answers reader questions about a...