One of our clients, who invested in their new Hansen Pole Building in 2008, contacted us today to inquire as to if the building they ordered would support composition shingle roofing.  My darling wife (and editor) said to me as she read this, “Haven’t they constructed their building yet, or why do they need to replace the roof already?”  My answers: “Yes and poor installation”.  They built their pole building in 2008, but did not pre-drill their roof steel.  They had screws all over the place, many of them not hitting purlins.  You guessed it – they basically created a colander.  So now they figured it was easier to replace the steel with shingles.  Not so. 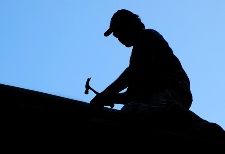 Although any structural assembly involving lumber has a fairly significant built in safety factor, Hansen Buildings uses a roof truss top chord dead load of 3.3 psf. This gives a safety cushion of 65% above actual dead loads.

Standard asphalt shingles weigh 235 pounds per 100 square feet and require asphalt impregnated (felt) paper underneath, which weighs another 15 pounds per 100 square feet. These must be installed over (at a minimum) 7/16” oriented strand board (osb). The osb adds 47 pounds per 4’ x 8’ panel or 1.47 psf. Code requires a shingled roof to be designed to support the weight of a re-roof, so the minimum design dead load for a shingled roof would be 6.69 psf. The roof truss industry typically uses a minimum top chord dead load of seven psf for roofs with shingles.

Even ignoring the weight of a reroof, the shingled roof assembly would weigh 4.34 psf, which would be more than 30% greater than the dead load the roof system was designed to support.

The answer to the question asked was – no.  There is more to the story which compounds the “fix” to their problem, but let’s just say “it would have been better to do it right the first time.”

While the probability is unlikely, due to the longevity of steel roofing, if you feel you ever might consider reroofing your pole building with composition shingles, it would be best to order your building with the roof having a dead load carrying capacity of no less than seven pounds per square foot.

2 thoughts on “Re-roofing with Shingles”