As I said yesterday, between 1952 and 2001, more trees grew, more trees died, and more were harvested.  Why? Forest density has a huge role in tree morbidity.  Forest restoration begins with sound ecologic management practices.

I have a home in the state of Washington, and in fact, live a good share of the year in an area heavily forested.  My own beautiful area is dying because it’s choked with unhealthy trees.  So much legislation has prohibited logging in the National Forests.  What we are doing is setting up these trees to be burned own or “bugged to death”. 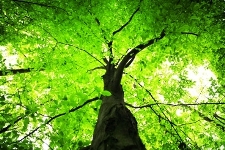 At least 50.4 million acres of national forests are at high risk of severe forest fire, with 80% of this acreage in the West. In parts of the West national forests have become more susceptible to outbreaks of insects and diseases as well as severe fire. To a large degree, these forest health problems contributed to the severity of recent wildfires, which were some of the worst in the last 50 years. Such fires not only pose danger to people, but severe, long-lasting damage is likely to result to wildlife and watersheds when a fire burns, particularly in drought years.

Forest health directly affects watershed conditions, including water quality, by regulating the amount, timing, and sedimentation of runoff. Severe fires put ecological values at risk, including water quality and species recovery, as well as homes in rural areas. The most extensive and serious problem with the health of national forests is the over-accumulation of vegetation, which has caused an increasing number of large, intense, uncontrollable, and catastrophically destructive wildfires.

According to the Forest Service, forests have accumulated an “unnatural build-up” of fuels, setting “conditions for unnaturally intense fires which threaten communities, air, soil, water quality, and plant and animal species.” Forest Service scientists have been warning of the fuel buildup for at least 30 years. The Forest Service expects harvests from national forests to remain near today’s levels during the next 50 years, with increases in annual growth increments and mortality.

This means denser forests than today, with more dead wood in them. Many western forests are already too dense, with more trees than the site can support. Scientists anticipate increased fuel accumulations, lengthened fire seasons, and intensified burning conditions, all contributing to larger and more catastrophic wildfires.

One smart solution is to get our national forests producing again. The 187 million acres of national forests support 45 percent of the nation’s softwood timber inventory, but supply just 1 percent of our nation’s commercial wood. “Buy American tells us ecological responsibility requires we source our food as locally as possible.  But we get our wood from other nations and continents?  What’s wrong with this picture? Canada now supplies one-third of our softwood framing lumber and the southern hemisphere supplies a huge portion of our pine lumber.

What we’ve got here is a world-class asset which can be actively managed for a wide range of ecological and economic benefits in a conservative manner I believe most Americans would find smart, responsible and beautiful.

Dear Guru? Use Galvanized Nails or Not?
Welcome to Ask the Pole Barn Guru - where you can ...
Incising Lumber
Incising My former wife (mother of my two younges...
Builder Warranty Example
Example Builder Warranty Disclaimer – this and ...