Home >> Lumber >> All Graded Lumber is Not the Same

All Graded Lumber is Not the Same

Standard & Btr and #2 Graded Lumber Are Not the Same

Although I had a couple of years’ experience in the prefabricated metal connector plated truss industry, my first opportunity to truly “fly solo” was when I was hired, at the end of August 1979 to manage the truss plant at what was then Lucas Plywood and Lumber, in Salem, Oregon.

My predecessor, Ken Chowning, had managed it for several years and was going into retirement on the Oregon Coast. I was assured he would remain around for a month or so, to make sure there was a smooth transition. He did remain around – until noon of my first day, and before he left, I was given a tour of the facility.

Once I got past being traumatized by trusses laid out on steel tables having their truss plates savagely beaten in by hammers with flat steel plates welded onto their faces, the next shocker was – they were using all green lumber! https://www.hansenpolebuildings.com/blog/2011/09/499green-lumber-vs-dry-lumber/

Reorganizing my psyche, and beginning to wonder what world I had put myself into, Ken proudly showed me their completed trusses. Built from 2x4s (no issues there). He happily explained how using #2 graded 2×4 was making them a whopping pile of money. 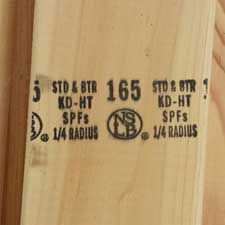 How he had gotten sold the farm on this one and never gotten snagged by a Building Inspector or during a random third party truss inspection was totally beyond my comprehension!

“Standard” graded lumber is classified as being “Light Framing”. #2 lumber fits into the category of “Structural Light Framing”. The difference in permitted characteristics between the two grades being slope of grain, where standard can be up to 1 in 4 and #2 is 1 in 8. Basically the #2 grade is closer to being vertically grained.

Whilst this one characteristic may seem minimal, it plays a huge part in the strength of the material. #2 grade is roughly 235% stronger in bending, 240% stronger in tension, 125% stronger in compression parallel to the grain and 123% greater in modulus of elasticity. For bending and tension, a single #2 2×4 is stronger than two standard grade pieces!

Most lumberyards do not carry #2 grade 2×4, which leads to many pole buildings and trusses every four feet on top of truss carriers atop posts placed every eight feet (what we refer to as a four and eight building) ending up being built to less than Code requirements (read more about girts and bending at: https://www.hansenpolebuildings.com/blog/2012/03/girts/).

Considering a four and eight pole building of your own? Take a cruise around the lumberyard first, if all you can find are “Std”, “Standard” or “Std&btr” graded 2×4, the supplier isn’t prepared to provide a building which will adequately support climactic loads!

Rough Cut Lumber, Insurance, and Girt Orientation
DEAR POLE BARN GURU: Hi, I’m planning on building ...
Wood I-Joists for Your Barndominium
With many barndominiums being multi-storied, or at...
Pressure Treated Posts: 1807.3.1
Not near as exciting as 867-5309, but this one Sec...