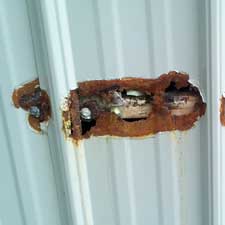 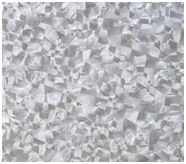 My first exposure to Galvalume ® was when ASC Pacific introduced “twice-the-life” Zincalume in the 1980s. They were marketing the product in its bare (unpainted) form as an alternative to the more familiar bare galvanized sheet steel. It looks similar to galvanized steel, but the visible crystals (or spangle) are smaller and close together, giving it a smoother appearance.  The combination of zinc and aluminum enhances both the positive and negative effects of aluminum.

Because aluminum is corrosion-resistant, Galvalume is more corrosion-resistant than galvanized steel, but because aluminum provides barrier protection instead of galvanic protection, scratches and cut edges are less protected.
Most consumers are familiar with old barn with bare galvanized steel panels which rusts (oxidizes) red. Bare Galvalume steel panels are not bright and shiny when new, unlike galvanized panels. As Galvalume ages, it oxidizes white. One prolific builder in the Pacific Northwest was actually even selling the product as a white roof!

Galvalume is a sheet steel with a hot dip applied alloy coating of about 55% aluminum 45% zinc. It is manufactured and sold as a trademarked product by companies such as Bethlehem Steel and National Steel.

I did find out, (the hard way) there are some limitations to uses of bare Galvalume steel panels. When the product first came on the market, we provided it as roofing for a building which later became a hog confinement barn (unbeknownst to us). The client called within two years of the roofing being installed, to complain about fist sized holes developing in his roofing. According to the roll former, It turns out the Galvalume coating had a chemical reaction to the confined urea, which basically “ate” holes in the steel. For this reason, Galvalume is best not used in animal confinement buildings.

Prepainted Galvalume roofing and siding panels are now used on buildings everywhere. It combines well with most other building materials and treatments. As such its versatility allows it to be used almost anywhere on building exteriors. Its excellent corrosion resistance has been proven by field performance on buildings for decades. An estimated 40 billion square feet of prepainted Galvalume sheeting covers buildings in all kinds of climates and environments in North America, Europe, Asia and Australia. The combination of long-lived Galvalume sheet with a wide range of modern high-performance paint systems results in a functional, durable, eye-appealing building product.