OK, I admit, at times I can be a bit “over-the-top” when it comes to pole buildings. I even get Google alerts for any stories which mention pole buildings! Nearly every day there is an alert about a pole building having been broken into. Pretty sad, when one thinks about it, as the concept of a new pole building is to protect those valuables.

Much of the information below is from a November 6, 2013 article written by Jim Hayden for The Holland Sentinel: 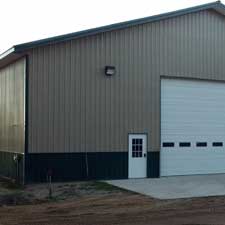 Alllegan County — Allegan County Sheriff’s Office deputies and the Michigan State Police are investigating several break-ins and thefts over the last few weeks in the northwest corner of the county. Areas in Laketown and Manlius townships have seen most of the thefts.

The suspects are taking items from pole barns and outbuildings. They most likely have a vehicle large enough to transport tools and equipment such as generators and air compressors.

“For example, if you have been putting off on buying or installing a motion sensor light on your pole barn, now would be a great time to complete that project,” he said in a press release.

If you see any suspicious activity, call 911.

• Walk around your home and outbuildings in the daylight and check for items outside that someone could use to gain entry to a building, remove items people could use to climb in a window and trim back shrubs and landscaping to prevent people from concealing themselves.

• Walk around your pole building after dark and check areas for additional lighting, if current lighting is directed properly and if doors and windows are visible in the light.

• Walk around the inside of your outbuildings to see if the windows are locked, if valuables are hidden and if you have recorded serial numbers or taken photos of valuables to assist in recovery if they are stolen.

• Other tips include adding deadbolt locks, asking neighbors to keep an eye on the property and watching for strange vehicles in the area. Don’t post your work schedule or vacation plans on social media.

Much of this is just common sense, but common sense isn’t always common – and far too often, action is delayed until too late – after there has been a break-in.