Thanks to www.ocala.com May 24, 2011 for their article, “Florida Building Codes Limit Tornado Damage”

While surveying tornado damage in Tuscaloosa, Ala., University of Florida researcher David O. Prevatt said he was struck by the city’s large number of old homes susceptible to storm damage.

“We have to expect this sort of damage unless we decide to do something differently,” said Prevatt, an assistant professor of civil and 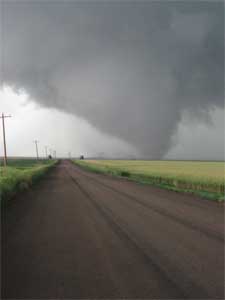 Prevatt is the principal investigator of a research project documenting damage from the tornado that devastated Tuscaloosa last month. He’s planning to make a similar trip to Joplin, Mo., where one of the deadliest U.S. twisters on record struck Sunday and killed at least 116 people.

Prevatt believes that new building codes, like those instituted in response to hurricanes in Florida, could reduce some of the damage from tornadoes in those areas.

Florida, he said, doesn’t typically get the extreme twisters that have recently struck Alabama and Missouri.

“Florida as a whole doesn’t really see those type of tornadoes,” he said.

There are exceptions. In February 1998, violent tornadoes that swept across four counties in Central Florida killed 41 people. In 2007, 21 people died when tornadoes left a 70-mile trail of destruction across Lake and Volusia counties, including parts of The Villages.

Prevatt said the damage he saw in Tuscaloosa included buildings knocked off their foundations and homes where roofs were nowhere to be found. He made a trip last year to Hiroshima, so he can compare the devastation in Alabama to photos he saw of Hiroshima after the atomic bombing.

Tuscaloosa “really looked like a bomb site,” he said.

Prevatt and researchers from several other universities spent a week in Tuscaloosa documenting damage to about 150 homes. Their work is being funded by the National Science Foundation and International Association for Wind Engineering.

Now his attention is turning to Joplin, where more than 2,000 structures were leveled. He expects to travel there late this week or early next week, after conditions improve.

Modern pole building design allows for structures to be designed to withstand or reduce damage from tornado winds. Columns embedded into the ground eliminate the weak point of stick frame construction in the connection of walls to foundations. The embedment itself can be designed to withstand uplift and overturning forces for any desired wind speed.

Roof trusses can be attached directly to the columns using seven gauge steel brackets with through bolts. This connection eliminates another noted stick frame weakness – connecting trusses to wall top plates, which is typically done with either toe nails, or light gauge steel connectors.

The Florida Building Code has the most stringent wind requirements in the United States. The 29 gauge steel roofing and siding has Florida approvals to be used in hurricane regions. With appropriate spacing of framing members, this steel cladding, attached with properly placed diaphragm screws, will withstand even the highest recorded wind speeds.  Pole building designs may help to reduce damage and save lives.