Our eldest daughter Bailey, as a professional horse trainer, has spent a great deal of her life with horses in round pens. Generally round pens are unprotected in the great outdoors, leading to them not being able to be used in inclement weather. Personally, experience has shown it is far more economical to build a square structure and then finish off the inside to create a round training area, than to actually construct a round barn.

However if one has enough money (we are talking boatloads) – anything is possible. Below are excerpts from the October 20, 2017 Construction Magazine:

It’s highly unlikely you will ever be called upon to build a hexadecagon (16 sided) barn, but any builder can appreciate the work accomplished by Silas Treadway, a timber framer from South Stafford, Vermont, especially when it comes to the elaborate truss design.

His client, a retired Dartmouth professor, had the barn built for his wife so she could exercise her horses in inclement weather. A round barn was requested to conform to the standard pattern for training and exercising horses, but because it made framing sense to divide the structure into sections, it was built with 16 sides, with wall posts just under 12 ft. apart. 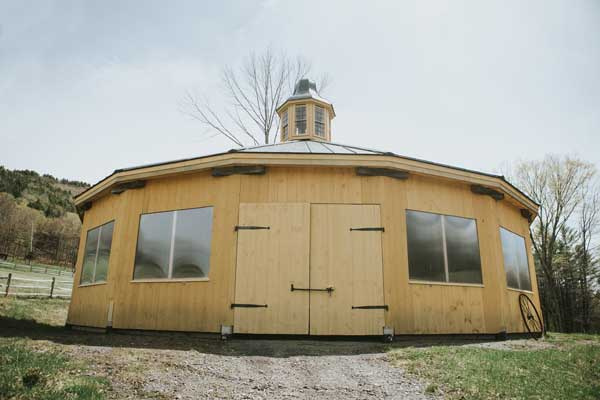 *The rustic simplicity of the riding arena’s exterior conceals the complexity revealed within.

Treadway would go on to write a technical article about the project in Timber Framing magazine. In it, he explained the challenges and solutions.

“The vitals of any good timber roof truss include well-footed top chords able to withstand the imposed live and static loads, as well as bending side to side, and a tension-resisting bottom chord, supported if necessary to avoid sagging. These basic problems are dealt with in every plausible configuration in historic churches and meetinghouses, some more successful than others, and always in a rectangular of square plan. To form a (mostly) conical roof shape, I would have multiple truss sections intersect one another. One practical way to join so many large timbers cleanly would be to build a large central cluster column and increase the area where all these vital members could be joined one by one, especially as we would be working in Eastern spruce, prone to twist and bow as it dries. The open built-up column also happened to yield a convenient framework for a central cupola, which I deemed necessary for aesthetics and good ventilation.”

As noted, Treadway went with 16 flat sides as opposed to a truly “round” structure. “To reduce intersections at the central column, only every other wall post would support a truss end,” Treadway said. “ Intermediate 7x12x22-ft. rafters would land short of the center ring, atop a sort of principal purlin structure. Eight principal; rafters meant only four complete truss units intersecting. Thinking in these terms helped us get our heads around a daunting cut-list…”

Treadway and fellow timber framer, Hunter Grossman, Eastern River Post and Beam, Strafford, hand raised the majority of the frame, “employing a 24-foot. gin pole with cable boat-winch and several other makeshift poles with block and tackle as needed,” he said. “We stood up the walls first, one piece at a time. This initial raising we completed in two days…”

Strategic planning and precision workmanship went into the design and installation of the truss system.

That was the easy part. Next came the roof framing and central column. The installation of a 190 ft. tension ring and supporting falsework helped to insure stability for the remaining build.

A crane was hired to place the finished cupola and intermediate rafters into position. 3×4 common rafters and 1-in. pine decking were applied prior to installation of the standing-seam steel roofing.  John Kinnarney, owner of Iron Horse Roofing since 1992, said the roofing wasn’t necessarily complicated, just time consuming because every piece of metal had to be precisely measured and cut to accommodate the round roof. It was also not his first rodeo: he has covered other complex timber-framed roof structures.

Treadway installed operable 9/9 double-hung windows in the cupola–one operable from ground by pulley system–to allow for extra ventilation in summer months. Traditional strap-hinged swinging doors were built for the arena.

Although the building itself was a success, with nominal shrinkage reported since its 2016 completion, unfortunately, the owner’s wife died soon after it was built.

Silas Treadway’s complete 7-page article, “Intersecting Long-Span Trusses”, with diagrams and photos, can be seen in the March 2017 issue of Timber Framing Magazine, the Journal of the Timber Framers Guild. Copies can be downloaded from the organization’s online store: https://www.tfguild.org