Just in case I have never mentioned how much I appreciate the questions posed to me by Bob, one of the Hansen Pole Buildings’ Designers, I will do so here.

“I got into a discussion with a gentleman in Kansas that liked our design approach (post spacing, double interior trusses, purlins on edge, etc.) but has no faith at all that he or his crew would hit all of the purlins on edge with the roofing screws.  We discussed pre-drilling and I had him off the ledge, but when the discussion of book shelf girts came up, he started breathing hard again.  Now I’m pretty sure book shelf girts is the only option these days for any pole barn, but it seems I’m dealing with a client that is afraid of pre-drilling and his ability to square his roof and building.

One of your blogs describes the simple fix for a missed hole (“Either push the underlying purlin up towards the peak of the roof, or push it down towards the eave line until the pre-drilled hole aligns with the center of the purlin.”) but I’m having trouble imagining being able to push a purlin that is in place that far.  And if a purlin is pushed into position as described, what happens upon release?  Maybe this is a situation that I could appreciate more with personal experience, but I’m not getting there with my imagination alone… and as a result I won’t be terribly convincing that it’s really that easy.” 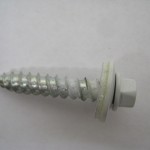 The beauty of pre-drilling pilot holes for roof and wall screws is perfectly straight lines. Straight screw lines are truly a thing of beauty – there are few things in life as pleasing as looking across a wall or roof and seeing the screws lined up like soldiers.

In an ideal world, every piece of lumber would be absolutely perfectly straight, and remain this way forever. Lumber, even though it is produced in a factory (a sawmill), is organic – it really wants to return to its nature as a tree. This means it wants to warp, twist, cup, crook or otherwise deflect.

The wonderful thing about lumber is it will flex a long way in the weak (1-1/2” narrow direction). This is exactly why wall girts placed flat on the outside of columns rarely meet the requirements of the codes – they deflect too far!

With both ends of a roof purlin restrained by an engineered joist hanger, or wall girts restrained at each end by solid blocking, the only portion of the framing which will be a potential for a “shiner” is as the girt or purlin approaches the middle of the span.

In the Hansen Buildings product guide (downloadable free on our website), is a photo of my feet (seriously) – as I stand on a 2×6 laid flat (I am standing on the wide 5-1/2 inch face. The 12 foot long 2×6 probably bends close to six inches at the center!

Whilst Bob (and his client) may be concerned about the ability to move purlins or girts up or down, the reality is – wood is forgiving, it can be moved remarkably easily to where it should have been had we been living in the previously mentioned ideal world.

And remember, steel roofing and siding functions much like very strong, very thin plywood. Once the screws are in place, the strength of the screws and the rigidity of the steel will easily hold everything where it ought to be.

FOOTNOTE: (Added by JAHansen, Mike’s wife) – Coming into the pole building business over a dozen years ago, knowing absolutely nothing about lumber, steel and the like, I can certainly identify with the skeptical client.  When you haven’t experienced the ease of building with lumber, 1-1/2” sounds pretty small to “hit” with a screw!

However, I can testify as a true novice at building, Mike’s words are straight as an arrow.  I’ve personally assisted on half a dozen buildings over the past years, and I can say almost every time there was a purlin or girt that looked like the screws were going to “miss” – especially on the wall girts where the weight of the wood sometimes caused the center to droop down an inch or more.  The holes near the ends were not a question for putting the screws into the wood. Because they are near the ends, the holes were “right on”.  We made sure on the center of each purlin or girt to use a block of wood as a support (wall girts) or in case of the roof purlins a “lever” to push the center into alignment.  It’s much easier than it sounds, and yes, the screws were dead on.

Thousands of pole buildings have been built, with no leaking roofs.  That should be solid proof, but if you still have doubts – go watch a pole building being constructed.  Seeing is believing.