OK, I was web surfing again! My wife thinks I spend all of my time on the ‘net Facebooking….well, I actually do some real research.

I found this post recently on www.garagejournal.com, in reference to a comparison between all steel and post frame (pole) buildings. The poster cited this as why he regrets not having constructed an all steel building for himself:

“The down side for me was not being able to spec the building with an overhead crane supported by the trusses. If I went with steel I’d have a five ton overhead in my shop right now. I really regret that”. 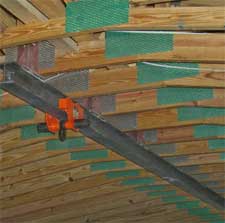 Shaking the dust off from my prefabricated wood roof truss designer’s hat (I have owned my own truss plants from another life), I can assure the writer he was sadly misinformed. There were numerous times I designed a roof truss system to support suspended crane loads.

Take this example, a 50 foot span pole building, with doubled (two ply) trusses spaced every 12 feet. Adding a five ton load to these trusses would be the equivalent of under 17 psf (pounds per square foot) of load being added. Highly doable. The truss designer would need to know where on the trusses the load would be supported, and then they can be designed accordingly. With very wide spans, or high loads, increasing to a three ply truss, from a double, may be required.

More often than not, overhead crane systems in pole buildings are supported from the wall columns. The columns are very strong in compression (downward load) and the connection of a crane system to the columns can be done relatively easily. The cautions would be to make sure the system (both building and crane attachments) are designed by a RDP (Registered Design Professional – an architect or engineer) and the column footing diameters are increased appropriately to account for the added weight of the system.

With truly informed experts on the design side of the equation, almost anything can be done with a pole building, and usually at a more reasonable cost than other alternatives.

Collateral Loads and Why They Matter

Collateral loads are additional dead loads hung from the building, such as sprinkler systems; drop ceilings, HVAC equipment, lighting etc. These are the loads which are most often overlooked or neglected in the design of a new pole building. Many times, it is just no one having made the client aware. Most building sales people and even designers and engineers, do not go beyond present day use to discuss what the building may be used for in the future.

Generally, the actually dead load weight of roof truss bottom chords and the minimal lateral bracing needed to restrain them from movement is about one-half of a pound, per square foot (psf). Most pole building trusses are designed using a one psf load, which will allow for the weight of standard electrical wiring and lights. As an example, for a 30’ x 40’ building approximately 600 pounds of wiring and lighting could be evenly distributed across the roof truss bottom chords, without the need to increase the load carrying capacity.


2×6 ceiling joists at two foot on center will add about ¾ psf.

These loads are cumulative. If you have more than one, you add them together. In most cases, a ceiling load of 5 psf will be adequate to handle a layer of 5/8″ drywall, ceiling joists and blown in insulation.

Many of us are packrats. We accumulate “stuff” and the space in the trusses looks like a good place to put it.  When I first visited the home of my now bride of 12 years, I took one look “up” in her garage and quickly ran for cover!  The trusses just weren’t designed for the “stuff” she had stored up there.  Her defiant assertion of “if it ain’t broke…” finally gave way to “ok, if you insist” and we cleaned it all out…ten years later!

The International Building Codes have a provision to add 20 psf of live load onto the bottom chord of trusses where a box 42” tall and 24” in width would fit between the top and bottom chords of prefabricated roof trusses, in areas where a truss web would not interfere. This same provision mandates an increase in the bottom chord dead load to 10 psf.

The roof system of your new building is not a place to become penny wise and pound foolish. Overloading a roof system, beyond its design capacity, can result in catastrophic failure.

Planning a new building? Discuss not only your future needs, but also what other owners of your building might do with the building, with your Building Designer.

Some folks are pushing budget just to get the basic building but have plans for future interior build out. From a liability position, the building owner bears the risk if ordering a building which assumes no collateral loads, then later turns it into living space with joists, drywall and insulation.

Always look towards solving future needs. It is fairly inexpensive to add ceiling loading to trusses, and saves a world of potential grief later.